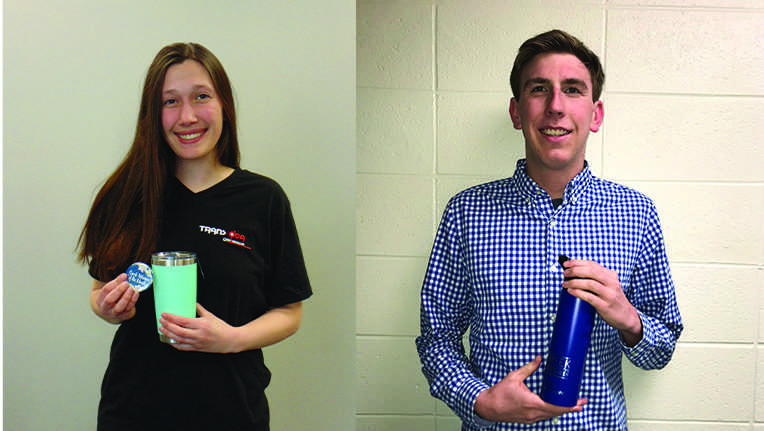 Greek Life would like to recognize Max Ausdemore as Greek Man of the Month for February.

Ausdemore is a mathematics major from Mankato, Minnesota, and is the vice president of Pi Kappa Alpha.

He was nominated for his exceptional work organizing socials with other organizations on campus this semester and his work on the Interfraternity Council Executive Board.

Ausdemore is a community assistant in Binnewies Hall, a State A Thon morale leader and is involved with the Honors College. Ausdemore also volunteers at the Humane Society and Feeding Brookings in his spare time.

Greek Life has given many opportunities to Ausdemore and he plans to continue devoting his time to the campus and Greek community.
“(Greek life) has opened many doors for me to meet an outstanding community and gain leadership roles within it,” Ausdemore said.

Greek Life would like to recognize Jackie Pajl as Greek Woman of the Month for February.

Pajl is a senior animal science major with a science specialization from Yankton, South Dakota, is a member of Ceres Women’s Fraternity, and has served as the spirit chair and recruitment chair.

She participated in projects with Ceres that include cleaning up local highways, Relay for Life, Feeding Brookings, Boys and Girls Club, United Living Community and the Women’s Gala.

Since coming to SDSU, she has participated in various activities within the university including Little International, Collegiate 4-H, a study abroad trip to Australia and department research projects. She volunteers extensively and has received a scholarship from the Dakota Southern Cattlemen’s Association, 2017 third in novice Horse Fitting for Little International, SDSU Artificial Insemination Certificate of Completion, received the Ceres commitment cup and placed fourth overall on a team of four for the Animal Science Academic Quadrathalon.

“I have grown to be more outgoing and involved because of Greek Life. I hope to help undergraduate women find their sisterhood and have that forever bond,” Pajl said.