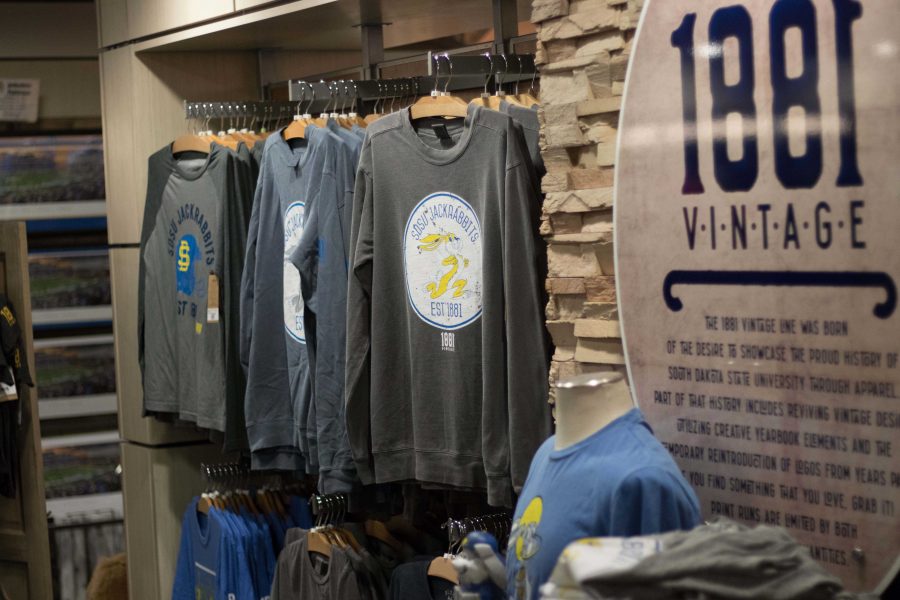 T-shirts from the 1881 Vintage line bring back the old Jackrabbit logo 10 years after retiring it.. The Vintage line was designed by an art team in the Trademark and Licensing Department.

The University Bookstore unveiled their 1881 Vintage apparel and merchandise line Sept. 1 to celebrate the 10th anniversary of retiring the old Jackrabbit.

Due to licensing limitations, the clothing featuring the old Jack can only be carried in stores and online for a total of four months. Clothing will be restocked until December and will be available until supplies run out.

Samantha Tutt, manager of retail operations for the University Bookstore, said they wanted to bring back the history of the old Jackrabbit.

“It has been really successful so far, because I know a lot of alumni have really missed the old Jack,” Tutt said.

The first day the line was released, styles were selling out in the bookstore and Tutt was restocking immediately. She said online sales have also been successful due to alumni who live far away.

Callie Duque, a senior math and Spanish major, believes the vintage line is a neat way to celebrate the university’s history. Duque’s family has attended SDSU for generations.

“My dad was visiting SDSU after the vintage line was revealed and he was excited to buy a shirt that had the same mascot on it as when he attended college,” Duque said.

An art team in the Trademark and Licensing Department created all the art for the vintage line. The designs were then sent to Tutt and she was in charge of putting them on the clothing.

“The art team recreated some designs, but also used a lot of the same graphics as when the old Jackrabbit was the mascot,” Tutt said. “We really wanted to bring back the same designs as were used in the past.”

“Being able to purchase clothing that has the same mascot as when my mom attended SDSU is really awesome,” Schoenfelder said. “It makes me feel connected to my family and proud to have generations that attended the university.”

About 25 to 30 styles of clothing are featured in the vintage line, including: T-shirts, crew necks, hoodies, long sleeves and youth pieces. According to Tutt, they chose Blue 84 as the brand for the line because it “instilled really cool, old vintage blends.” Tutt picked a variation of tri-blends and ring-spun styles.

The 1881 Vintage line featuring the vintage art themes will still be available after December.

The main form of marketing for the new vintage line has been through Facebook. Tutt said they have received a lot of hits and people are responding well. They have used several other online sites as well, but have focused mainly on Facebook because it has been so successful.

“It has just been a lot of fun and I have really enjoyed getting to pick out styles and clothing,” Tutt said. “I think that overall it will be very successful.”

The vintage line is carried at the University Bookstore, online at Jackrabbit Central and at Jack and Charlie’s in Sioux Falls.