Freidel’s 35 points not enough as SDSU falls in quarterfinals 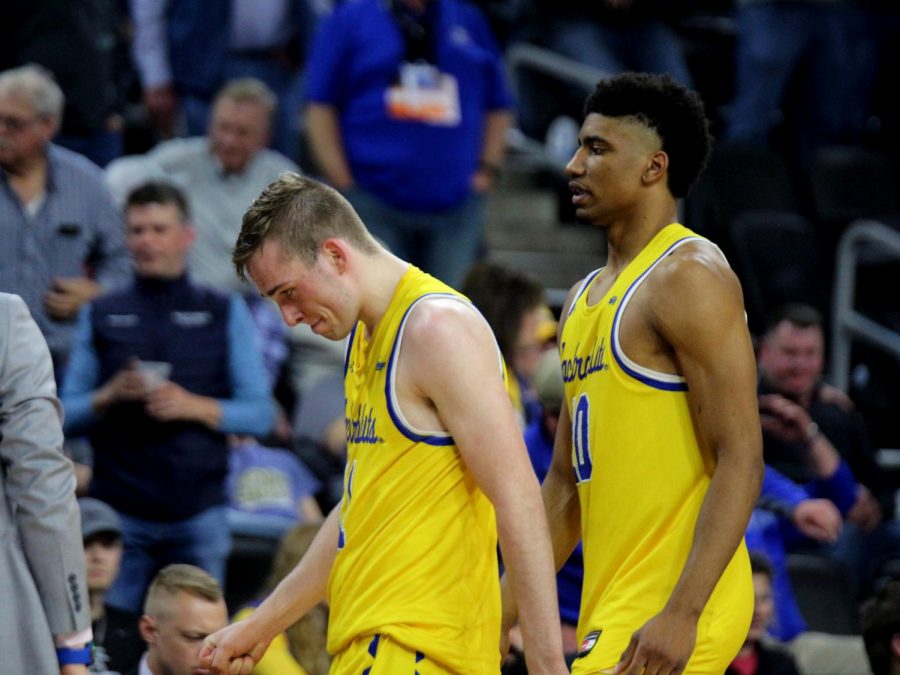 With Summit League Player of the Year Douglas Wilson sidelined due to injury, the Jackrabbits failed to advance to the semifinals for the second straight season.

“We never gave up; we gave ourselves a chance to win,” said SDSU freshman Noah Freidel.

In Wilson’s absence, it was Freidel, the newly-named Summit League Freshman of the Year, who put together a masterful performance — it just wasn’t enough. The young guard played 39 minutes and scored 35 points, including seven 3s.

“He made a phenomenal effort — even from the tip,” said PFW head coach Jon Coffman, whose team is competing in its last Summit League tournament before moving to the Horizon League next season. “I’m glad we won’t be in the league to watch him as a sophomore. … He’s really impressive right now.”

Alongside Freidel, Alex Arians notched a double-double with 15 points and 10 rebounds but was the only other Jackrabbit to reach double figures in scoring. Without his frontcourt mate, Matt Dentlinger struggled, managing just six points and seven rebounds after a 20-point outing against North Dakota State in Fargo (also without Wilson).

SDSU head coach Eric Henderson takes responsibility for the execution at the end of the game, saying he needed to be more clear in the huddle and should’ve made sure everyone was on the same page.

Despite trailing most of the game, the Jackrabbits had several chances to win in the final moments, but miscommunications in the final seconds allowed PFW to get a breakaway layup that put the Mastodons up three. On the Jacks’ ensuing possession, they weren’t able to even get a game-tying shot attempt away.

The ‘Dons were lead by Matt Holba, who led his team with 21 points and seven rebounds. All told, four PFW players scored double digits, boosting PFW to an unlikely victory.

As a young team with a first-time head coach, not many expected this team to make their way to the top of the Summit League standings. In fact, SDSU received just two first-place votes in the preseason poll but earned the 2-seed as co-Summit champions (with North Dakota State). Overcoming such adversity led to an emotional response from Henderson following his team’s early exit from the tournament.

“We are awfully young, we started three freshmen and two sophomores with not a lot of experience but we had that all year,” Henderson said. “We played unselfishly, competed like crazy but we just got a little anxious tonight, got spread out but I am super proud of those guys in the locker room and that’s why it stings so bad — it’s because they are great kids.”