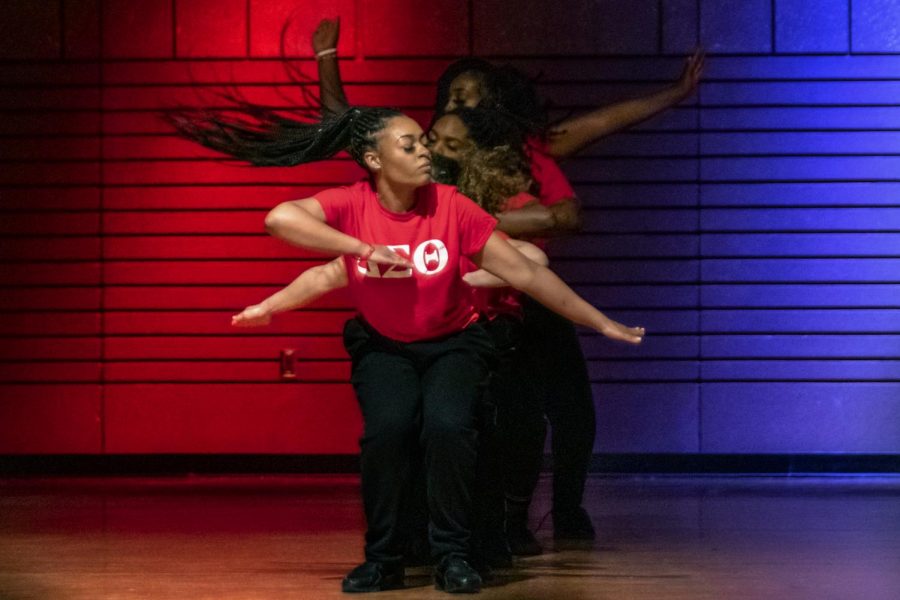 The month of February brings culture, pride and education in the form of Black History Month. At South Dakota State University, organizations like the Black Student Alliance (BSA) arrange programs throughout the month to promote black culture and educate others on black history.

To kick off the month, the BSA held a step show Saturday, Feb. 1. Step, which originated in black greek fraternities, is a combination of singing, marching and clapping.

“We tell our stories through music,” Williams said.

Within greek organizations, every group has an individual step called the Founder’s Step.

“It tells the story of how that organization came about,” Williams said.

Delta Sigma Theta was the only female sorority that performed.

Akeah Aschmeller, BSA president, hopes the Step Show and other programs put on during Black History Month educate people on black history and highlight their culture so people can appreciate it.

“I think education is the biggest thing,” Aschmeller said. “I think a lot of people have the misconception that black people are just here for attention… By going to these events, it’s initiating those conversations, those hard topics you might not want to have.”

For those who missed the Step Show, fear not; there are plenty of other events coming up this month.

Naomi Wynn, BSA secretary, believes events like these prompt conversation rather than arguments.

“Instead of initiating a fight, just listen to them and build a conversation around that,” Wynn said.

One way to get those conversations started is around a game of Apples to Apples.

From 5-7 p.m. Thursday, Feb. 13, Brookings Public Library is hosting a Black History night, complete with guest speakers from SDSU’s Multicultural Center and BSA. There will be soul food that guests can sample and a variety of books by black authors and about black culture.

The BSA will host a soul food meal at 11 a.m. Friday, Feb. 14 in the Multicultural Center for an authentic southern meal.

The Soul Food Luncheon is a way to try different foods and learn more about black culture.

“This is our culture, this is our food,” Wynn said.

BSA will also be hosting “#VotingWhileBlack,” where a Minnesota politician will be speaking on running for public office and the power of voting at 2 p.m. Wednesday, Feb. 26, in the Lewis and Clark Room. The purpose of the event is to educate people on their resources for voting, learn about who is representing them and find out how best to talk with them.

“It’s really important for people to go out and vote,” Aschmeller said. “While you’re black, you need to know your rights.”

Friday, Feb. 28 will mark the end of the BSA’s Black History Month events. To wrap up the month, BSA will be showing the movie “Black and Blue” at 7 p.m. in the basement of the Union. “Black and Blue” highlights the challenges of a black female in the police force who struggles after she witness a murder by corrupt officers. Taneea Rhodes, a freshman member of BSA, commented on the impact this movie should have on students.

“That movie really brings it all,” Rhodes said.

The overall goal of the BSA’s efforts during Black History Month is to shed light on black culture in hope that it will start conversations with people about what it really means to be black and how they are affected by society’s prejudices.

“In a demographic area such as South Dakota, with there not being as many minorities, I think it’s important that we’re showcasing [Black History Month] so people can get educated,” Aschmeller said.