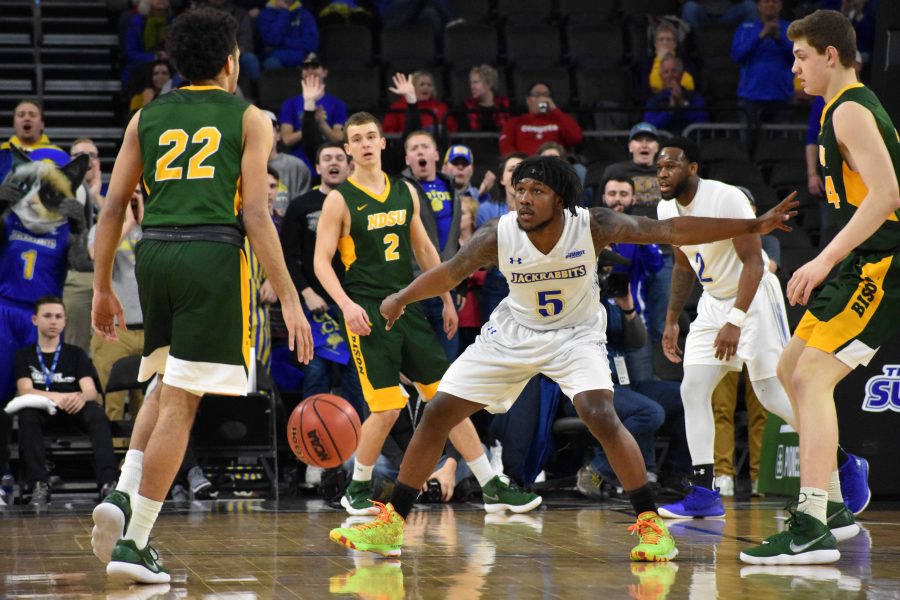 South Dakota State is headed back to the Summit League final for the fourth-consecutive year after a 78-57 victory over the fifth-seeded North Dakota State Bison.

SDSU was never threatened in the first half and led the game for 39:08. At one point their lead was as large as 30 points.

At half, NDSU switched things around and went to a smaller lineup that saw their senior guard, A.J. Jacobson take on the role of center. The Bison looked poised to make a run coming out of the gates with a 7-0 run, which grew into an 11-1 run.

“You look at the numbers at half and they are only shooting 44 percent,” NDSU head coach David Richman said of the change after the game. “Our deficiencies were coming from our offense.”

They might have been, but the Jacks answered every punch the Bison threw and then some.

The Jacks had a 16-8 run that seemingly snuffed out any possibility for a comeback.

“Basketball is a game of momentum swings and our guys did a good job of not losing our minds there,” said junior forward Mike Daum after the game.

During the second half, the Jacks shot nearly 54 percent from the field, including a 36 percent mark from three-point range.

Summit League Freshman of the Year, David Jenkins, Jr., was coming off of a performance against Western Illinois in which he scored three points on 10 attempts.

“I knew I couldn’t play any worse than I did the other day,” Jenkins said.

And he didn’t. In fact, Jenkins led the way for the Jacks Monday night.

Jenkins had 24 points against the Bison and connected on two three-pointers and contributed five rebounds.

Head coach T.J. Otzelberger revealed after the game that he met with Jenkins after his performance against Western Illinois to offer encouragement.

“I just wanted him to know how much I believed in him,” Otzelberger said.

Outside of Jenkins and Daum, there was no other SDSU player in double digit scoring figures. But, they still made impacts.

As a team, the Jacks out-rebounded the Bison 39-33, for a plus six rebounding margin. SDSU also hung onto the ball much better than NDSU did with a plus four turnover margin and caused 12 Bison turnovers.

South Dakota State is set to face the winner of South Dakota and Denver for the Championship. That game will take place at 8:30 p.m. at the Denny Sanford PREMIER Center in Sioux Falls. Follow @CollegianSports on Twitter for live updates.