Reflections of a Collegian alumnus 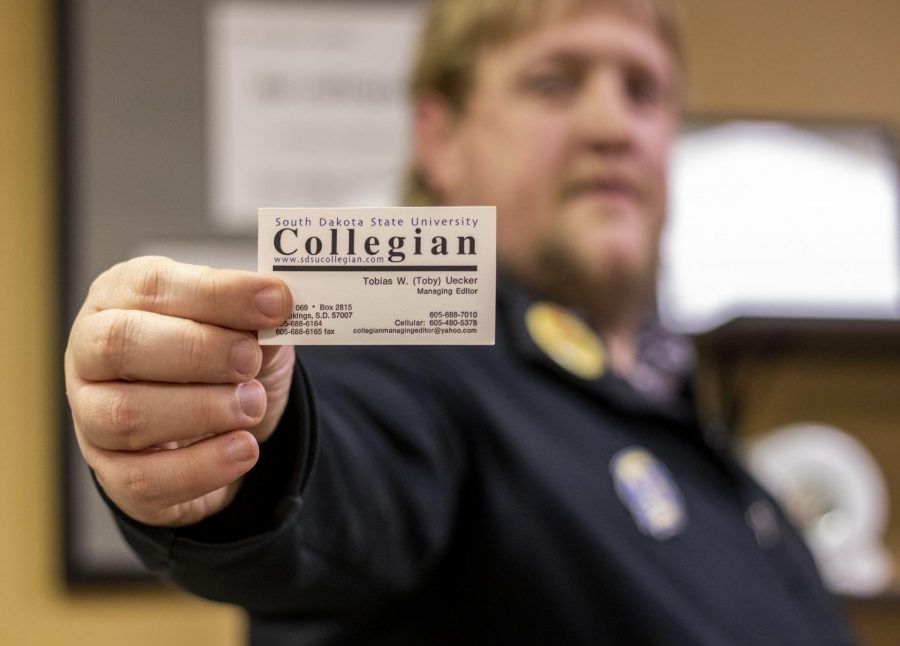 Toby Uecker still has his business card from his time as the Managing Editor at The Collegian.

Let’s start with a confession: I’m writing these words on deadline.

That fact, as I think about it, is probably appropriate for a column addressing my time at The Collegian. After all, I did more writing than I should have for this esteemed periodical on Monday afternoons and evenings for what was at that time a Tuesday publication.

The Collegian is one of few things that spanned my entire career at SDSU from 2000 to 2004. I started as a sportswriter, covering the first season of SDSU Jackrabbit soccer, along with brief stints writing stories on wrestling, men’s and women’s basketball and other teams. I made most of my deadlines, wrote decent summaries and learned early on that we were never to describe any SDSU team as “off to a good start” if we used the shortened version of Jackrabbits.

Writing sports was not a natural fit for me. Interviewing the head coaches of nationally competitive basketball teams put this speech and debate kid way out of his league. But I did OK. The coaches—even a notoriously taciturn one whose long silences literally made me sweat—made weekly time for my clumsy interviews. The interviews eventually became less clumsy. These first years of reporting helped me learn to be more at ease in uncomfortable situations and helped me appreciate the value of finding common purpose with people. The coaches wanted my article to be successful. Remembering that fact made finding our way toward our shared goal easier.

By junior year, I was State and Local Editor, overseeing a news section that reported on Students’ Association Senate, city and county government and the South Dakota legislature. In essence, State and Local was all the “newsy” stuff that didn’t make it onto the front page. Throughout the year, my reporters and I honed our abilities to sit through tremendously long meetings and come up with 200-word summaries that filled an awkward page in the middle of the paper.

Newswriting is far from the only place where the information filtering process comes in handy. I can’t count the number of times I’ve been a player, rather than an observer, in a meeting that only loosely respects any rules of organization. Many of those times, summarizing and compartmentalizing the issues as if I was writing a Students’ Association recap has brought at least a little clarity to the conversation.

My Collegian experience culminated as Managing Editor my senior year, a gig that came with my very first personalized business card. I essentially served as the “number two” for the broadsheet edition of the paper. The year shared with that editorial team is what first comes to mind anytime someone asks about my Collegian experience.

I probably don’t even realize the full list of valuable lessons—I’d call them “transferable skills” if I were in a job interview—that came from that year of late nights, later nights and early mornings. We adjudicated personnel and performance issues, we debated mission and vision, we negotiated contracts, we set weekly priorities and goals, we made plans that we had to completely revamp, we fought with technology, we fought with each other and then made up because we were a team that had a job to do. Oh, yeah. And we went to class and had families and significant others and did all the other life stuff, too.

If we measure the success of 135 years of student journalism at SDSU solely by the list of writers, reporters and photographers produced by the Collegian and its predecessors, that’s a remarkable story. Stories aren’t only for journalists, though. Stories and skills developed on staff are also for Collegian alumni who are parents and teachers and business owners and factory workers and everything else there is to do out there.

Even if we still do more work than we should on deadline.