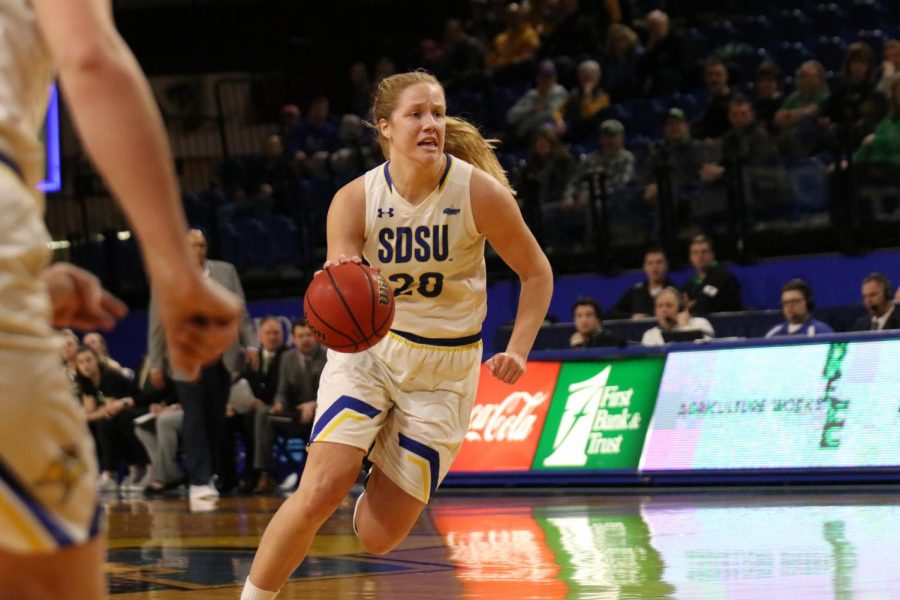 VERMILLION — Adverse winter weather may have forced a reschedule of the season’s first meeting between the South Dakota State and University of South Dakota women’s basketball programs, but a 24-hour postponement appeared to only delay the inevitable.

The No. 25/21 Coyotes (17-2, 6-0 Summit League) came out and blitzed the Jackrabbits (14-7, 6-1 Summit), as the visitors fell behind by as many as 23 points in the first half and never truly threatened the Summit League leaders in an 83-48 loss Sunday afternoon at the Sanford Coyote Sports Center.

“We just did not play well enough,” said SDSU head coach Aaron Johnston in a postgame radio interview. “They played really well at the start. They jumped on us and got us a little bit rattled early, and we just didn’t really recover from that.”

By the time SDSU had found any semblance of offensive rhythm, it was midway through the second quarter and the ‘Yotes had already built a 20-point lead. All told, the second quarter was SDSU’s best of the afternoon — scoring a game-high 18 points and holding USD to a game-low 16.

But it wasn’t nearly enough.

USD responded by winning the third quarter — an area where SDSU held a 65-42 advantage across three meetings a season ago — 20-9, effectively ending any chance of a comeback.

Coyote senior Ciara Duffy led USD offensively, recording game-highs in points (21), rebounds (11) and assists (4). On the other end, the Coyote defense was exceptional throughout the afternoon, holding the Jacks to 36.7% from the field and 17.6% from 3-point range.

“What we really just wanted to do was compete every possession and I thought we did a nice job of that today,” said USD head coach Dawn Plitzuweit in a postgame television interview with MidcoSN.

Now the burden of making the Summit League regular-season race and postseason tournament competitive falls to the Jackrabbits, who, despite Sunday’s loss, have established themselves as the conference’s clear No. 2.

Just three nights prior to Sunday’s humbling result, SDSU ran over, around and through fourth-place University of North Dakota (12-6, 3-2 Summit) in a 35-point blowout. Back on Jan. 4, the Jacks routed third-place Western Illinois (10-9, 4-2 Summit) by 30.

But the Coyotes did something very similar Sunday, proving that while there’s a considerable gap between SDSU and whoever is No. 3, there is an equally large gap between the in-state rivals.

“It’s a really tough loss,” Johnston said. “[We’re] disappointed — everybody is. We don’t dismiss it, it’s a big deal. We want to play better for our fans and certainly for ourselves, but we’ll have to move past it fairly quickly and keep moving forward.”