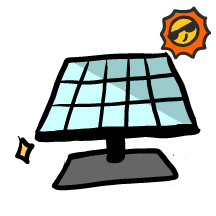 Everything has pros and cons, but we often hear more about one side of the story than the other. Solar panels sometimes fall victim to this. They have a high standing in the eyes of society; however, it’s not very often that the negatives are discussed.

GreenMatch, a group designed to assist in the switch to renewable energy systems, suggests that  — in some situations — it may be smarter to not use batteries to store the solar energy for later use. They suggest using the electricity produced by solar panels during the day, as the panels generate it, to try and lower costs.

Solar panels have also been associated with pollution. According to the Institute for Energy Research, some solar panels are made out of harmful metals like chromium, lead and cadmium. If disposed of improperly, these metals can seep into drinking water supplies.

Most solar panels possess a warranty of between 20 and 30 years. During this period of time, most warranties also state that the panel should be running at or above 80% of its total efficiency. This means that after a certain point,the panels will become less efficient, and thus will need to be replaced. As handy as it might be, they don’t just disappear after they become inoperative, so what happens to them?

“In countries like China, India and Ghana, communities living near e-waste dumps often burn the waste… the resulting smoke contains toxic fumes that are carcinogenic and teratogenic (birth defect-causing) when inhaled,” according to Environmental Progress, a research group focusing on renewable energy. “Solar panels create 300 times more toxic waste per unit of energy than do nuclear power plants.”

Panels are also difficult to recycle. The materials they are made from are not the problem; rather, it’s having to disassemble the product.

Additionally, solar panels generate more electricity on days with more sunshine. Living in South Dakota, there is much more sunshine throughout the summer than during the winter, but this doesn’t necessarily imply the impracticality of using solar year-round.

Even the most ideal technologies are far from perfect. There are downsides to everything, including renewable technologies, and these must be addressed. However, there is potential for these hurdles to be overcome and countless researchers working to do that.