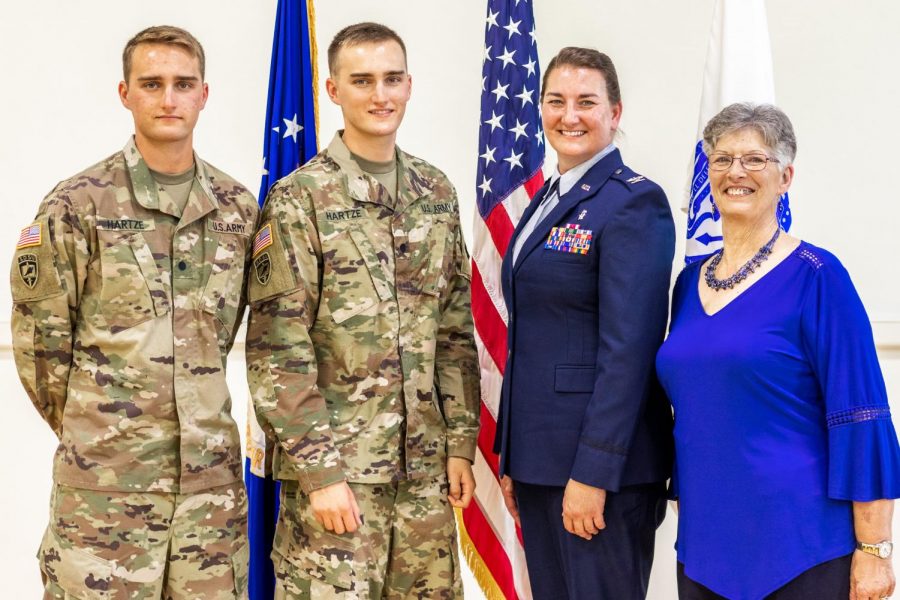 Rachelle Hartze, a 1990 South Dakota State University graduate, was promoted to colonel in the United States Air Force on Aug. 30 in the same building she once trained as a cadet in the SDSU Army ROTC program.

Hartze has had a great career with the United States military, with over 19 years of active service in the Air Force and eight years in the Army Reserve.

She served in Operations Just Cause, Iraqi Freedom and Enduring Freedom.

She graduated from SDSU with a degree in communication studies, and later earned another degree in nursing and a master’s in community health nursing.

According to Hartze’s Award Narrative, during her time at Balad Air Force Theater Hospital as Assistant Nurse Manager, “Her team cared for 2,800 patients, assisted 20 Critical Care Aeromedical Transport Teams and supported 1,200 aerovac missions, earning the reputation as the “busiest ward in the AOR (area of responsibility).”

During her time at SDSU, she was active in the theater programs and played supporting roles in “The Unsinkable Molly Brown” and “Fiddler on the Roof.”

“I really enjoyed having two very different groups of peers and friends. Both my Army ROTC and the theater and speech departments,” Hartze said.

In her new role in Dayton, Ohio, she will be supporting the Medical-Surgical Unit by training and overseeing new medical professionals in the armed forces.

“Part of our job as clinical experts is to not only grow them as nurses but also to grow them as leaders,” Hartze said.

Some of her favorite memories at SDSU include participating in joint Army and Air Force drilling ceremonies and competing and performing across the country. Her least favorite was the morning PT (personal training) endless flutter kicks.

Hartze’s father, Dennis Collins, served two tours in Vietnam as a pilot. She described one of his experiences as he flew his Birddog plane as part of a response to a distress call. She said he was flying a pattern and realized he needed to fly a second pattern.

During the second pattern, he took fire through the belly of the plane. One of the bullets came through the joystick and hit him in the leg. After flying back to the base, he told those on the ground he wanted the joystick before passing out from blood loss. Hartze’s mother gave her that joystick during one of her promotions.

Hartze had some advice for current SDSU ROTC cadets.

“Get involved in programs outside of ROTC,” Hartze said. “I know that’s very hard for cadets to do because not only are you fully engaged in your academics and you have a significant time commitment for the Army ROTC program and many cadets are also working to fund their education, but if they can carve out any time at all to get involved in other organizations it’s, I think, very important.”