Jacks head to Arizona for final away tournament 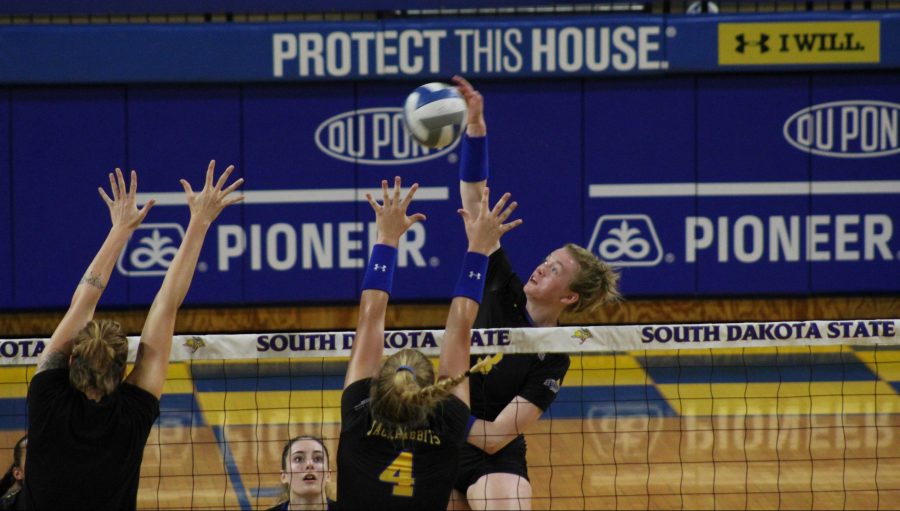 Coming off a 2-1 weekend in Texas, the South Dakota State University volleyball team is eager to get to their next tournament in Flagstaff, Arizona, Sept. 13-14.

The Jackrabbits started the tournament by beating Louisiana-Monroe in five sets.

“It wasn’t pretty, but we got the win and we always want to win,” said head coach Nicole Cirillo. “It is even better because we haven’t had that ability or fight in the past to pull out a close one in set five.”

Following their opening match, SDSU fell to host Lamar University in three sets, but ended the tournament with a 3-0 sweep over Prairie View A&M to take second place.

“For some of the returners, they see and feel the improvement in the team,” said Cirillo. “That is something that everyone is excited about, but the biggest thing is to remember to not be satisfied with just getting the win.”

Sitting at 3-3 overall, SDSU is heading southwest to play in the Lumberjack Classic this weekend. The Jacks will open play against host Northern Arizona University (3-3) at noon on Friday, followed by a matchup with Fresno State (4-2) at 5 p.m. SDSU’s third and final match of the tournament will be against Louisiana State (3-2) at 10 a.m. Saturday.

“Without watching a ton of videos, I know that (our opponents this weekend) are going to be bigger and more physical than what we have seen, but my biggest feedback is we still have to play the game,” said Cirillo. “As long as we do the things that we know that we can do, it is still going to be a match.”

Cirillo wants to instill a “go get ‘em” and “what do you have to lose” attitude in the team. She knows the team is capable of playing well, as long as they stay mentally tough and don’t get intimidated by the competition.

With all four teams hovering around the same record early in the season, the Jacks are simply looking to play their game in Arizona. With that mindset, Cirillo is hopeful her team will continue to improve before the Comfort Suites University Jackrabbit Invitational.