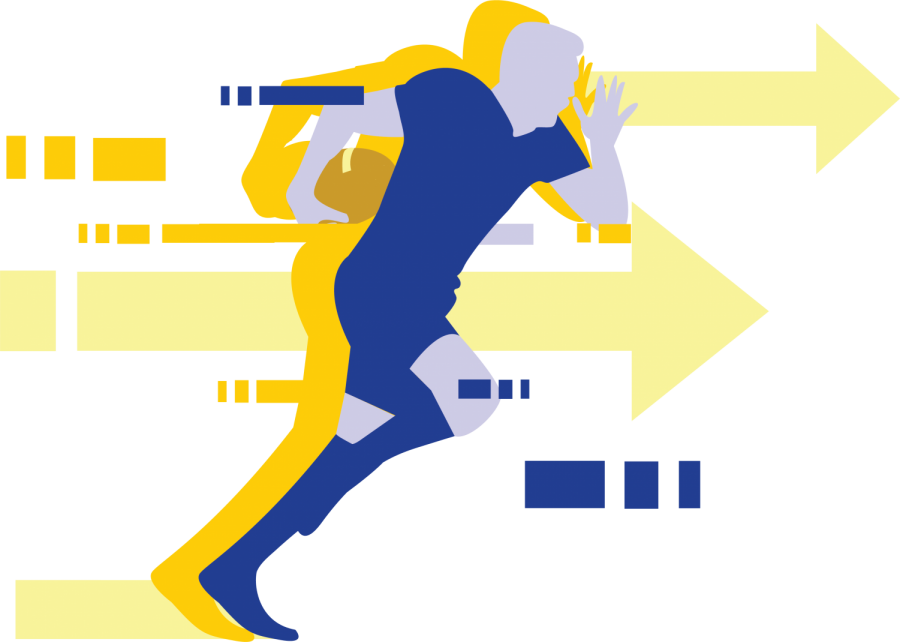 However, he isn’t deterred from playing the game.

Rugby has a reputation for being intense and harsh. Fifteen players, or seven for smaller teams, carry, pass or kick the ball to the end zone to score as many points as possible for two 40-minute halves. Players don’t wear pads, but still tackle to stop the ball from advancing to the opposing end zone.

While the game is “miserable,” the shared experience creates a unique culture surrounding the sport. Rugby has a particular focus on total inclusion and full participation.

Axtmann says it is “very much a family culture.”

“During that gruesome experience you forget any biases,” he continued. “It’s hard to hold a grudge against an opponent after you both feel like you’ve gotten in a car accident … They feel the same way you feel, and it doesn’t feel great.”

Unity also comes from the fact that “everyone is new to the game,” according to Olivia Knippling, field captain for the SDSU women’s club team. Because rugby is traditionally only played in college in the United States, especially the Midwest region, it creates a learning environment and a “no-judgment zone.”

“It’s not like basketball where people are primed for it from the time they’re third graders, so you’re not behind or ahead,” she said. “People who maybe have never been athletic, or told that they weren’t, can find a home in rugby.”

Rugby’s history has strongly enforced amateurism, especially during the second half of the 19th Century. At the time, professional athletes were looked down upon. Professionals were poor and paid to play their sport. Amateurs were wealthy, held another job, and played rugby for the sake of playing.

“Amateurism may be variously considered to be about doing things for the love of them, doing them without reward or material gain…” Lincoln Allison, the author of the book “Amateurism in Sport: An Analysis and Defence,” explains.

“Amateurism dictates the idea that the reason we come out and endure 80 minutes of hell,” Axtmann said. “We enjoy that culture and group of people.”

The comradery forms from doing something out of pure love of the game. There’s “hooting and hollering” of each team’s own chant, which is strictly performed after a game, according to Axtmann. There’s also a deep respect for the referee and opposing team, both Knippling and Axtmann said.

Knippling said there’s always a potluck after a tournament, provided by the hosting university.

“Everyone is expected to stay for it, it’s not an option. Everyone just hangs out, and you talk about the game. It’s a fun environment to be a part of,” Knippling said.

The game of rugby is played at the club level at SDSU. The men’s club plays in the Minnesota Rugby Union, which is made up of teams from North Dakota, South Dakota and Minnesota.

Axtmann has been on the team for three years and has played all throughout college. He said the club has experienced a lot of growth attributed to dedicated student leadership in the club to “legitimize the team.”

Indication of growth shows. The men’s club has extended its season from four weeks to eight, and membership has grown from seven people in 2017 to 20 this year.

The women’s club team has also advanced as growth is benchmarked by the increase of scheduled 15-player games versus seven-player. This year the women will play four 15-player games in their fall season.

Knippling says they share the same attitudes of wanting to legitimize the team as the men’s club team. The women’s team has training rules and health and safety standards for their players to ensure excellence.

“We really take it seriously. We would love to see rugby as a D-I sport here because the ladies have dedicated themselves to rugby. We as athletes want to be held to the same standard as D-I athletes. It deserves more support and recognition than it does now,” said Knippling.

The women’s first home game is 11 a.m. Sept. 14 versus the University of South Dakota, and the first game for the men is 1 p.m. Sept. 28 against North Dakota State. Both squads play at Sexauer Field.