Baja SAE team to compete with all-terrain vehicle in California 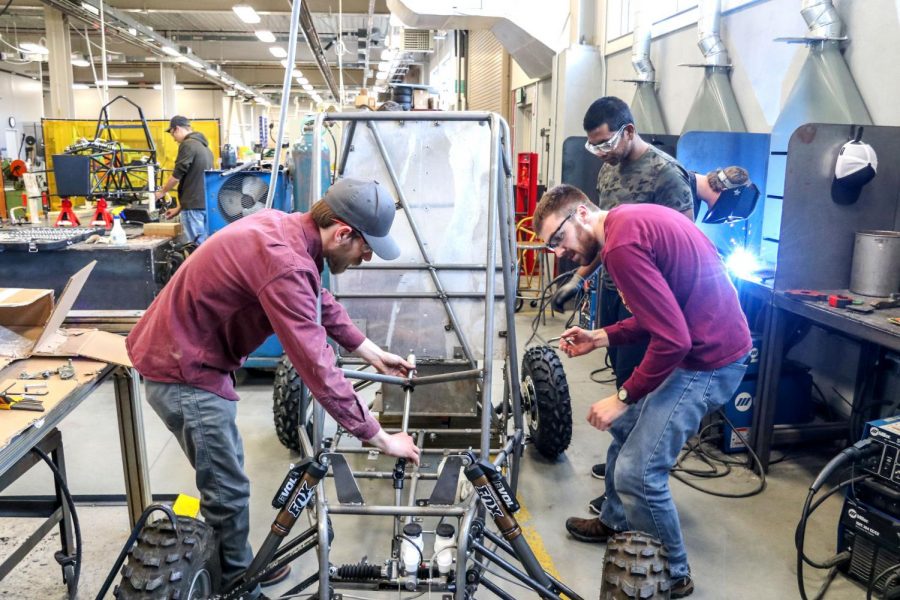 Since September, life for the Jackrabbit Baja SAE team has been nothing short of a “mad dash,” according to Zach Tucker.

For the first time in 10 years, Tucker, club president, and around 15 other mechanical engineering majors are gearing up to compete with their vehicle against 99 other schools in the Baja SAE California competition in May.

“It’s pretty difficult to get in, especially for people who are brand new at this thing,” Tucker said. “Probably 500 schools tried to get into this thing and only 100 schools get in and the rest go on a waiting list.”

The competition involves creating an all-terrain, single-seat vehicle that is durable enough to survive the four dynamic events and one static event. While members must plan, design, build, test and race their vehicle they also must promote and generate financial support for their vehicle.

The club began as a senior design project. Tucker and other senior mechanical engineer majors wanted to do something challenging. So, when their adviser Gregory Michna suggested it, they went for it and got started the second week of the academic year.

“Michna was like ‘I think it would be cool if this is something that we brought back,’” Tucker said. “We took it on as a role as a senior design project and a club… It’s amazing where it started and where it was at.”

SDSU had a team when the competition was called MiniBaja, according to Michna. Originally the team competed several times between 1993 and 2006.

“The Mechanical Engineering Department has undergone tremendous growth since that time, so I thought that we would have enough interested students to again field a Baja SAE team,” Michna said.

Since the club has been built from the ground up and came together so quickly, the club has gone by a simple philosophy: KISS which is an acronym for “Keep it simple, stupid.”

“It’s going to be heavy; it’s going to be very big, but it’s not going to break, that’s what we’re going for,” Tucker said. “The goal for next year is to know where we can improve. Somewhere five, 10 years down the line we could be winning competitions, that’s the goal.”

Every Tuesday, the club has been working on their vehicle. Right now, the club is in the building process. Tucker said all the time they have spent together has been a “good time.”

The vehicle should be completely done with initial construction within about two weeks and testing will begin.

Depending on how that goes, said Michna, the team will have to replace whatever parts they break, and it may need to go through a redesign phase to make things perform better.

“We want to optimize it as much as we can. With this being our first year, we want to keep it simple,” Tucker said.

The team competes May 16-19 in Gorman, California.