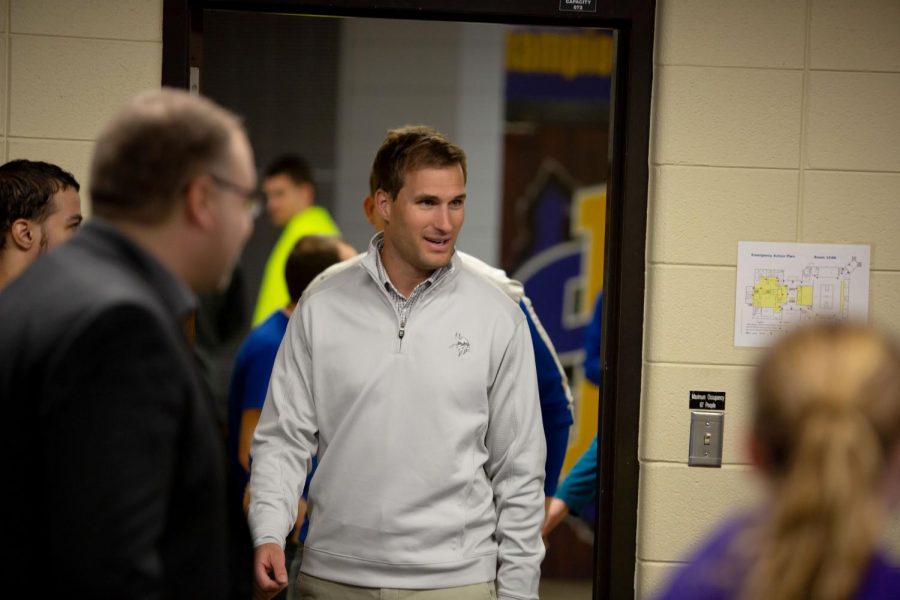 For the Vikings, season one of the Kirk Cousins’ era wasn’t what they hoped.

The team finished 8-7-1 and missed the playoffs. After a trip to the NFC Championship in 2017, the Vikings front office signed Cousins to a three-year, fully guaranteed, 84-million-dollar contract, in hopes he could lead them to a Super Bowl victory.

Cousins and the Vikings look to bounce back this season and make their way back into the playoffs. The Vikings have already started spring Organized Team Activities (OTAs).

Cousins is an active member of the Fellowship of Christian Athletes and is very outspoken about his faith. He was in Brookings Saturday, April 13, speaking at the Brookings chapter FCA victory rally. Before speaking at Frost Arena, The Collegian caught up with him.

The Collegian: What does it mean to you to have a platform to be able to speak at FCA events like this?

Kirk Cousins: We’ve always felt that playing football at a high level gives you a platform and we want to oversee that platform well, and it’s a privilege to have young people look up to you and share how my faith impacts everything I do at events like this.

S: What role has your faith played in putting you where you are right now?

KC: It’s the foundation of my whole life, so it’s played the biggest role in where I am and the decisions I’ve made to get here. It’s given me great peace through difficult times and it’s been a great anchor when there’s been a success, it’s really been my compass. You know you have a playbook on the football field, the Bible is my playbook for life, and so it really is my direction in football and in other decisions I make in relationships and in leading people.

S: How did you get involved with FCA?

KC: I had a big involvement with the campus ministry at Michigan State when I was a student and I was very involved, from weekly meetings to outreach events to one-on-one meetings with our team chaplain, who was on staff with the ministry. We had a lot of interaction and it played a large role in my spiritual development through my college years. I look back now and see how important it is to have that vibrate campus ministry, specifically in the sports world to the athletes, with how busy their lives can be.

S: What’s your main message going to be at the FCA Rally?

KC: I enjoy just telling my story and saying God has had his hand on my life and he has done far more in my football journey than I ever thought could happen…My life verse is Proverbs 3, 5 and 6, and if I could leave a thought with anybody, I would leave them with that verse.

T: Are you excited for Adam Thielen’s new contract?

KC: It’s great to get his deal locked up and know that he’s gonna be with the Vikings for a while now, and excited to see what he can do for the years ahead.

S: How do you use your faith on the field?

A: In all kinds of ways, the job can be a pressure-packed, demanding job and so when it comes to any anxieties, any stresses, I bring those before the Lord. When it comes to facing adversity, if you have an injury, if you have a setback, or you make a mistake, or you lose a big game, or have a tough season you bring that before the Lord and leave it as his feet. When you have success, thank Him for it, and you understand who you are in Christ and you understand your identity, that how you perform on the field doesn’t change your value as a person. Your identity is not rooted in who you are as a football player, your identity is rooted in who you are in Christ and that obviously has a huge impact on the way I approach the game.

S: Is there pressure being a Christian at the NFL level?

S: What are your thoughts on the upcoming Vikings’ season?

KC: I really like our roster, I like our coaching staff, our team, we have all the pieces in place that are needed to be a successful team. All these games seem to come down to the last couple of minutes and we’ve gotta be able to make those plays in crunch time, but when you’re sitting here in April looking ahead, I feel good about the pieces that are in place and can’t wait to put in the work over the next several months to lay the foundation so we can have a great year this fall.