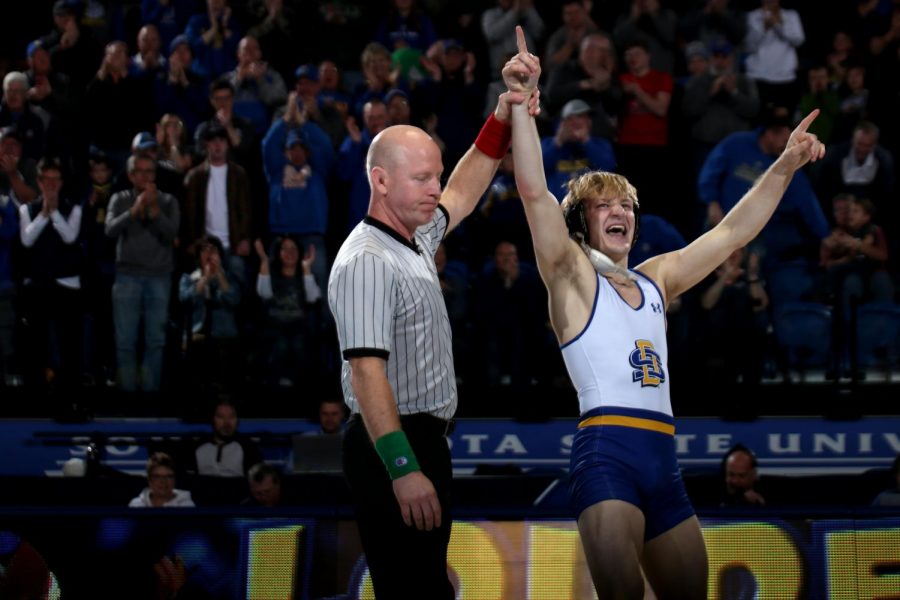 One. That’s how many qualifiers the South Dakota State wrestling team managed to send to the NCAA National Championships this year.

Just one year ago, the Jackrabbits sent six automatic qualifiers and an at-large bid. A year after sending seven wrestlers to the NCAA National Championships, South Dakota State will send one: Henry Pohlmeyer.

Pohlmeyer, a junior from Johnston, Iowa, earned a fifth-place finish in the Big 12 Championships after Khristian Olivas was unable to continue due to an injury in the match.

Zac Carlson didn’t place at the Big 12 Championships but was thought to be up for consideration at the 184-lbs class. Despite the consideration, Carlson wasn’t selected.

Carlson was ranked No. 22 in the latest NCAA Division I Ratings Percentage Index (RPI).

Pohlmeyer and Carlson were the lone two Jackrabbits in the RPI Top 25 rankings.

As a team, the Jackrabbits finished 10th in the Big 12 Tournament, finishing ahead of Air Force and Northern Colorado. Only Pohlmeyer advanced to the second day of the tournament.

As a team, Jackrabbits wrestlers went 6-18 at the Big 12 Championships.

The NCAA Division I Wrestling Championships will take place from March 21-23 at the PPG Paints Arena in Pittsburgh.