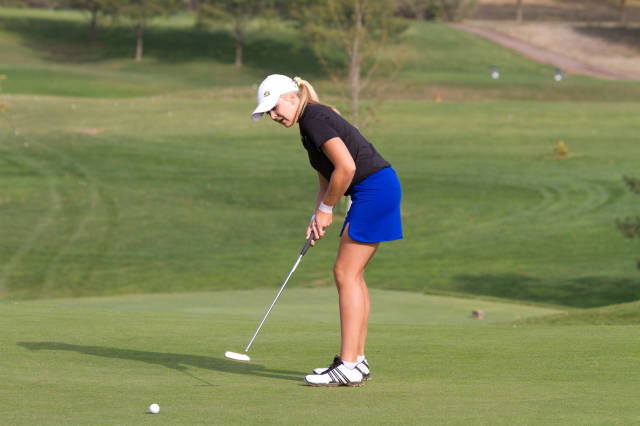 The South Dakota State men’s basketball team trailed by as many as 10 points early in Saturday’s showdown with the University of South Dakota, but used a 30-2 run later in the half to secure an 85-68 win over USD in front of a season-high crowd of 5,035 fans at Frost Arena in the South Dakota Corn Showdown Series.

Mike Daum scored a career-high 24 points to lead all players, and tied for game-high honors with six rebounds. George Marshall finished with 22 points while Deondre Parks had 14 and Keaton Moffitt had 11 in the win.

The Jacks will travel to Fort Wayne, Indiana to take on Indiana University–Purdue University Fort Wayne on Thursday in a showdown for first place in the Summit League.

The South Dakota State University women’s basketball team outscored Indiana University–Purdue University Fort Wayne 55-23 during the second and third quarters as the Jackrabbits rolled to a 92-64 win Saturday afternoon in front of 3,209 fans at Frost Arena in The Summit League action.

The game was SDSU’s seventh straight win and the 92 points are a season-best.

SDSU closes the regular season home schedule at 7 p.m. Thursday against Denver before playing their final three games of the season on the road, including Saturday in Vermillion, South Dakota when they take on USD looking to avenge a loss to the Coyotes in Brookings earlier in the season.

NEXT HOME: February 18 vs. Denver

The South Dakota State softball team had a rough start to their season at the University of Northern Iowa Indoor Classic this past weekend, as they dropped all five games they played at the UNI Dome. The Jacks fell short against UNI (twice), Saint Louis University, UW-Green Bay and Drake University.

Jordyn Sturgeon and Lauren Chirnside led the Jacks at the plate in the opening weekend, as Chirnside went 8-15 with a pair of home runs in the five games, while Sturgeon hit a homer in each of the Jacks three games on Friday.

The Jacks will look to get on the winning side of things this weekend when they travel to Arlington, Texas for the Maverick Invitational for two games against University of Texas at Arlington and three against Princeton University.

m’s school-record 12-dual winning streak came to an end Sunday as the 24th-ranked Jackrabbits were upended by No. 7 Oklahoma, 19-13.

The University of Oklahoma Sooners, who won four of the final five bouts to secure the victory, improved to 10-5 overall, including 5-1 in the Big 12. SDSU, meanwhile, fell to 13-6 overall and 5-2 against Big 12 Conference foes. All six of the Jackrabbits’ dual losses this season have been to teams currently ranked in the top 25.

The streak helped lead the Jacks into the top 25 polls, and the close match with the Sooners actually saw them move up as high as No. 22 in some polls.

The Jackrabbits close out the dual season next Sunday, Feb. 21 at North Dakota State at 2 p.m. at Bentson Bunker Fieldhouse on the NDSU campus in Fargo.

NEXT UP: February 21 @ North Dakota State

The South Dakota State University swimming and diving teams will compete at the 2016 Summit League Championships this week in Indianapolis. The four-day meet runs from Wednesday through Saturday at the Indiana University—Purdue University Indianapolis Natatorium.

Competition begins at 4 p.m. EST Wednesday with the men’s 3-meter diving preliminaries. The event finals, plus the 200-yard medley relays and 800-yard freestyle relays will be contested starting at 6 p.m.

For the last three days of competition, event preliminaries will begin at 11 a.m. EST, with the finals sessions starting at 6 p.m.

Denver is the defending champion in both the men’s and women’s divisions. SDSU finished third in the men’s division at the 2015 Summit League Swimming and Diving Championships, while the Jackrabbit women placed second for the second year in a row.

NEXT UP: February 17-20 @ Summit League Championships

The lone win for the Jackrabbits on the men’s side was Jeremiah Ary’s victory in the triple jump.

On the women’s side, Jazzelena Black and Amy Leiferman reset their school records in the triple jump and pole vault, respectively. Freshman Emily Donnay also placed first in the one mile run, and teamed with Jessica Eibs, Renae Dykstra and Marisa Shady to take first in the 4×800 meter relay.

SDSU will host one more meet before The Summit League Indoor Track and Field Championships. The Jacks will host the SDSU Tune-Up in Brookings Friday, Feb. 19.

NEXT UP: February 19 SDSU Tune-Up

The South Dakota State University baseball team has been picked to finish third in the Summit League standings during the upcoming 2016 season, according to a poll among the league’s six head coaches.

The Jackrabbits, who posted a 33-23 overall record and finished second in the league standings with an 18-11 mark in 2015, received one first-place vote and tallied a total of 17 points for their third-place showing in the preseason poll. Defending regular season and tournament champion Oral Roberts University received the other five first-place votes to be tabbed as the favorite with 25 points. Tournament runner-up Indiana University–Purdue University Fort Wayne was second with 19 points.

Rounding out the poll were the University of Nebraska-Omaha with 15 points, North Dakota State with eight points and Western Illinois University with six.

The Jackrabbits, coached by Dave Schrage, are scheduled to open the 2016 season Feb. 19 with a matchup against Florida Atlantic in Starkville, Mississippi. SDSU will play two games against both Florida Atlantic and host Mississippi State on the opening weekend.

NEXT UP: February 19 vs. Florida Atlantic @ Mississippi State, Starkville, Mississippi