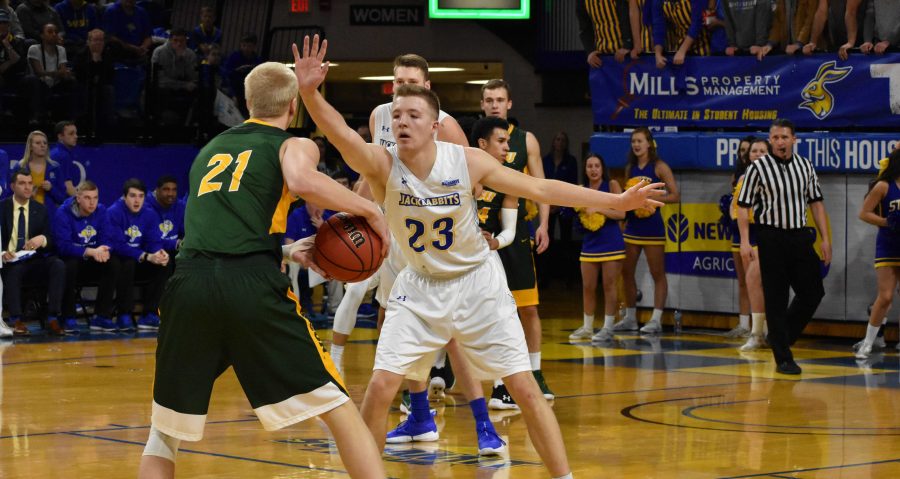 “I think our guys have started to understand the importance of that end of the floor,” head coach T.J. Otzelberger said.

The Jacks look to continue to excel on defense at 2 p.m. Feb. 18 when the Western Illinois Leathernecks come to Brookings. SDSU defeated WIU 98-70 Jan. 20 in Macomb, Illinois.

One guy that has helped the Jacks improve defensively is junior guard Brandon Key, who has had six steals during the winning streak.

“Brandon has been outstanding,” Otzelberger said. “I think his defensive pressure has been great. He’s really set the tone and gave the other teams’ point guards fits.”

Otzelberger thinks, for Jenkins to be consistent in the scoring column, he needs to focus on each side of the court.

Senior forward Reed Tellinghuisen has made 245 three-pointers in his career and is seven away from tying Clint Sargent’s school record for three-pointers made in a career.

With the victory over Oral Roberts the Jacks secured a top-two seed in the Summit League Tournament, but with three games remaining in the regular season, Otzelberger said SDSU needs to stay focused.

“We do not talk much about conference standings. We feel like if we focus on the next day, the next game and the next possession it will give us the best chance to reach our potential,” he said.

SDSU and USD will play Feb. 22 at Frost Arena and, as of right now, will be playing for the regular season conference championship.