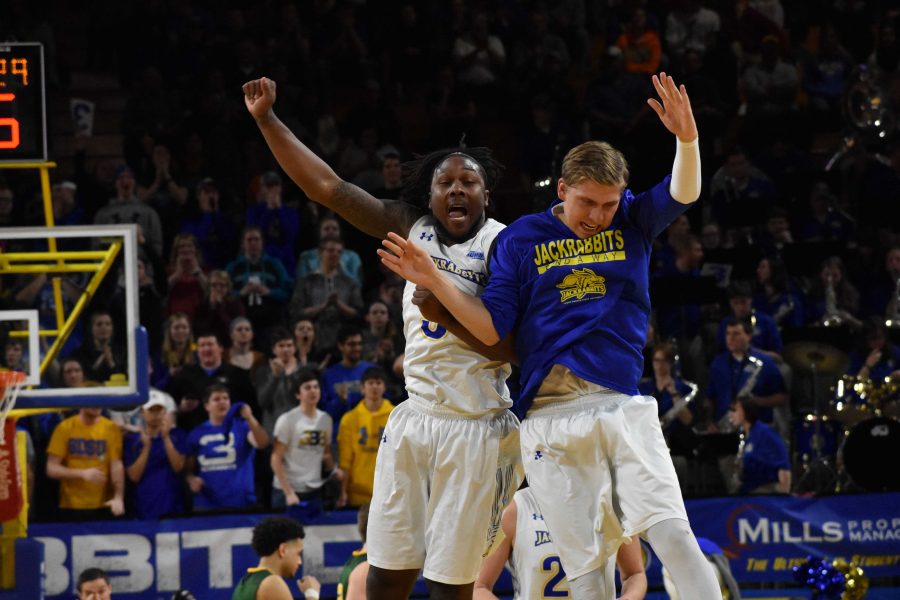 ABBY FULLENKAMP Freshman guard David Jenkins Jr. (5) and sophomore guard Beau Brown (15) celebrate Jenkins' layup before a media timeout during the second half of the game against NDSU Feb. 1. The Jacks beat the Bison 82-63. They host Western Illinois at 2pm Saturday, Feb. 17 in Frost Arena.

SDSU will be on the road for the next two games when they take on the Denver Pioneers Feb. 8 and the Oral Roberts Golden Eagles Feb. 10.

The Jacks defense carried them in their two victories last week as they gave up only 60 and 63 points against Omaha and NDSU. Head coach T.J. Otzelberger said the team feels a lot of pride on the defensive end of the floor.

“We’re understanding how important getting stops is and I think we’re generating a few more turnovers,” he said.

The Pioneers (10-13, 3-5) are coming off a week in which they beat South Dakota, who handed SDSU it’s only loss in the Summit League but fell to Fort Wayne.

Denver is shooting 47.9 percent from the field and is 7-3 at home this season and Otzelberger said the Jacks will need to be focused defensively if they want to come away with a victory. Tip off is scheduled for 8 p.m. at Magness Arena in Denver.

Junior forward Mike Daum is still the main man for the Jacks. Against NDSU he became the second player in program history to reach 2,000 points and it took him only 94 games.

“Mike is such an elite offensive talent,” Otzelberger said. “He has the ability to shoot the ball from anywhere on the floor and now he’s added the dimension of putting the ball on the floor from the perimeter and attack.”

The Jacks will need him to rebound the ball well against Oral Roberts. In the previous meeting between the two teams, Oral Roberts led by as many as nine points. The Jacks were able to come back and win 78-75, but the Golden Eagles dominated them inside, scoring 46 points in the paint while SDSU only scored 20.

“We have to try to keep it out of the paint and when it does go in we need to have more aggressiveness and a sense of urgency. Whether that means to double team or trap them, we need to find ways to make them kick it out,” Otzelberger said.

One guy who can help the Jacks accomplish that is junior point guard Tevin King, who is leading the team in steals per game with 1.8. King is also having his best year offensively averaging 9.9 points per game.

Otzelberger described King as someone who has done everything for the Jacks this season.

“He’s been somebody that has helped us win and has been a great winning enactor. His steals, his defense, his toughness, his leadership,” he said.

Tip off against the Golden Eagles is scheduled for 7 p.m. Feb. 10 at the Mabee Center in Tulsa, Oklahoma.