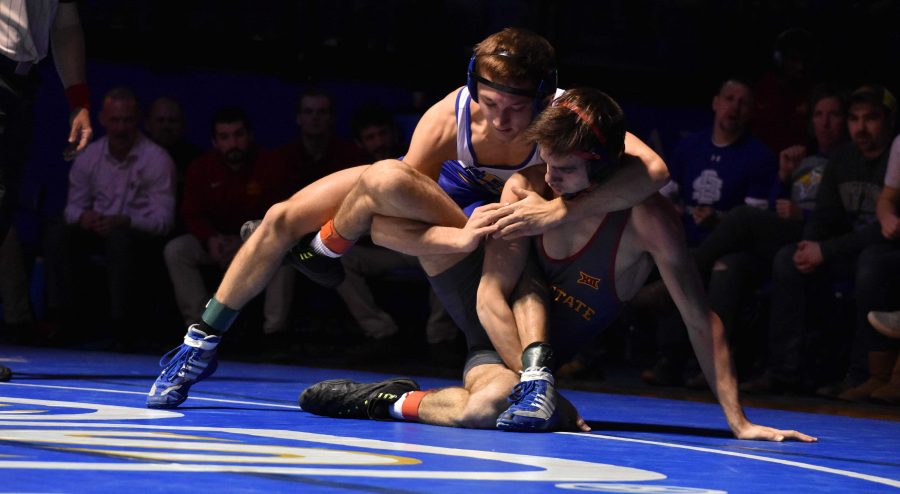 ABBY FULLENKAMP Freshman Connor Brown puts ISU Sinjin Briggs in a cradle during the 125-pound bout Feb. 4. Brown defeated Briggs by pin fall 2:07. The Jacks are 6-0 in the conference and are 11-2 overall. They host NDSU at 7pm Friday, Feb. 16 in Frost Arena.

South Dakota State wrestling will take their 11-match winning streak to the East Coast this week, as they travel for a two-match road trip against Pittsburgh and West Virginia.

The latest win for the No. 12 Jacks was a 30-15 victory against the Iowa State Cyclones. It was another impressive win for the Jacks and head coach Chris Bono, who picked up his 100th career win.

Freshman Connor Brown and Junior Seth Gross got the Jacks rolling. Brown recorded a pin fall, while Gross got a major decision. At the 141-weight class, the Cyclones forfeited and quickly found themselves in a 16-point deficit they couldn’t overcome.

The most surprising loss for the Jacks came at the 197-weight class. Senior Nate Rotert was pinned by Sam Colbray in the third period. It was the first dual loss on the season for Rotert.

“He just got caught, that’s it,” Bono said. “It’s all technique, really; keep your elbows in, everything he’s learned since he’s been in kindergarten.”

This will be the last road trip for the Jacks until they head to Tulsa, Oklahoma, for the March 4 Big 12 Championships.

It’ll be another week of tune-ups for SDSU to prepare for the upcoming tournaments – neither opposing teams are ranked by Intermat.

First the Jacks will travel to Pittsburgh, Pennsylvania, to take on Atlantic Coast Conference rivals, the Pittsburgh Panthers. It’ll be a non conference match in the midst of conference scheduling, a decision Bono made.

Pitt (2-13, 0-3) has struggled continuously throughout the year. The Panthers have lost three straight duals to ranked opponents. Their latest loss came against No. 5 North Carolina State Wolfpack.

In that match, North Carolina State dominated the Panthers. Pitt managed just three individual wins at the 125-pound, 133-pound and 197-pound weight classes. Similar to SDSU, Pitt has strength in those weight classes, but only has one ranked wrestler.

SDSU now has six ranked wrestlers, after junior Martin Mueller cracked the top 20 at the 184-weight class. Mueller is ranked at No. 20.

It’ll be a match that features two ranked wrestlers at the 133-weight class. Gross stayed on top of the 133 rankings, and the lone ranked wrestler for the Panthers, Dom Forys, is No. 11.

Despite their winning percentage being well below 500, Bono has stressed to his team not to take the Panthers lightly.

“They look like they are struggling on paper, but they are not,” Bono said. “It’s going to be a straight dogfight.”

Despite having a good atmosphere at home, Pittsburgh is just 1-4 in front of their crowd at Fitzgerald Field House, with their lone win coming from an 18-17 victory over the Oklahoma Sooners.

After the dual against Pitt, the Jacks travel to Morgantown, West Virginia, facing the WestVirginia Mountaineers in a Big 12 Conference showdown.

The Mountaineers (5-5, 4-3) struggled this season, but are back on track with two straight wins.

The latest contest for WVU was a 24-16 win over the Northern Colorado Bears in Big 12 action. The Mountaineers pulled away from the Bears, winning three straight matches from the 174-weight class to the 197-weight class.

Despite also struggling, the Mountaineers have proven effective in front of their home crowd, as they are 3-1 at The WVU Coliseum.

The Mountaineers have two ranked wrestlers. Zeke Moisey sits at No. 14 at the 125-weight class, while Jake Smith is the No. 18 197 wrestler.

The dual against Pittsburgh will start 6 p.m. on Jan. 9 and the West Virginia dual is scheduled for 1 p.m. on Jan. 11.