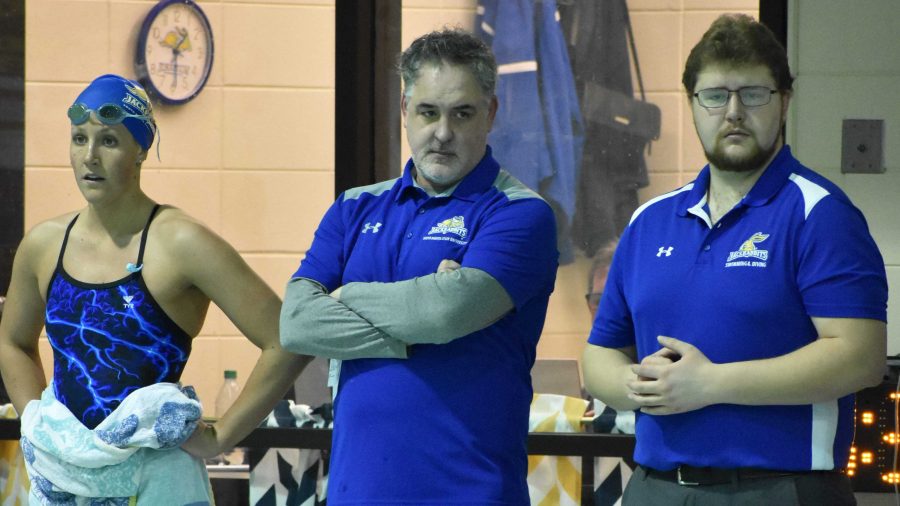 After 41 years with head coach Brad Erickson, the South Dakota State swimming and diving teams have found a new leader.

Doug Humphrey was hired in May 2017 and has been successful in his first season.

In high school, Humphrey knew he was going to be a coach when he worked with kids as young as five years old and as old as high school at a summer league in his hometown of Omaha, Nebraska.

“I was fortunate enough to have some swimmers around me that were willing to learn and I had some great coaches myself that I wanted to emulate,” he said.

Humphrey’s first collegiate job was at the University of Nebraska, his alma mater, as an assistant coach. He served there for nine years before taking over as head coach for the Northern Iowa Panthers in 2012.

Humphrey said the biggest change he’s had to deal with is coaching men because UNI did not have a men’s team. It was the first time since 2001 that he’d coached men after being an assistant for the women’s team at Nebraska.

Another difference is the resources available at SDSU are an improvement from UNI.

“Northern Iowa was a great opportunity, but their resources were limited,” Humphrey said. “Here there is a dedication to doing things the right way and being excellent.”

Senior Daniel Jacobson said Humphrey is a lot more laid back than Erickson and methodical.

“He’ll give you all the resources that you need to succeed, but it’s up to you to take advantage of them and use them,” Jacobson said.

Freshman Rori Conners said Humphrey does not entertain swimmers who don’t give maximum effort and that is one reason they are having a great season.

“If you’re not going to try, then he’s not going to worry about you because he has other people to focus on,” Conners said.

Even though his father wasn’t into swimming, Humphrey said he learned how to coach from him. His father coached him in baseball, football and basketball growing up and was an influence on his leadership style.

“I want to focus growth of the athlete,” Humphrey said. “Not only getting faster or becoming a better diver but more importantly growing in the classroom and setting yourself up for life after sports. Also growing into the person that you desire to be and not have our athletes feel like they need to fit in.”

Humphrey said his goal at SDSU is to win conference championships.

“That’s always going to be the goal,” Humphrey said. “Whether we feel that we’re close or not. We’re going to continue to improve and never stop and become complacent.”