‘The Shape of Water’: monster movie makes for enchanting romance 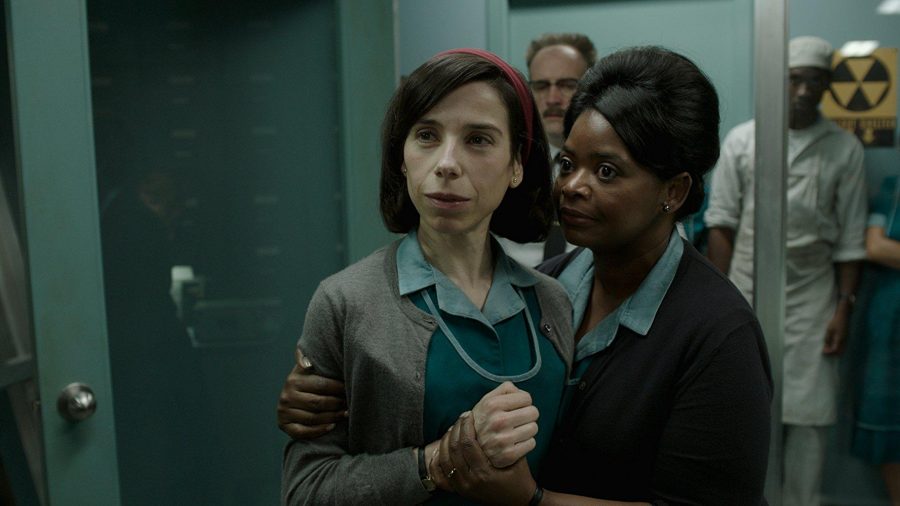 FOX SEARCHLIGHT PICTURES The Academy Award frontrunner with 13 nominations this year, “The Shape of Water” is directed by veteran filmmaker Guillermo del Toro and led by Sally Hawkins in a mute role for which she is nominated for best actress. The film tells a love story between a maintenance worker and an aquatic humanoid creature.

On the surface, you wouldn’t expect a movie like “The Shape of Water” to be anything close to an awards film, one engineered to win Oscars and other such over-hyped recognition.

The movie has a respectable cast: previous Oscar-nominee Sally Hawkins leads, and is joined by Octavia Spencer, Michael Shannon and Michael Stuhlbarg. It’s also being distributed by Fox Searchlight Pictures, a company to look out for every awards season.

But make no mistake, this is a monster movie. Set to a Cold War backdrop, a mute maintenance worker named Elisa (Sally Hawkins) discovers a humanlike aquatic creature at the secret government laboratory where she works. Resembling something like the monster from the Black Lagoon, she forms a love connection with the creature, just as the authorities who captured it make plans to destroy it.

There is no one better for this material than writer and director Guillermo del Toro. However, del Toro has seldom been seen as an awards-friendly face.

What really makes “The Shape of Water” part of the conversation for the coveted best picture award is its ability to speak to the forgotten people of a pre-civil rights era.

What does this film address? Try homophobia, sexism and racism – a trio of prejudices that could lead to disaster if they’re not handled respectfully. But the movie manages to take a well-rounded, considerate look at the issues through its impeccably written characters.

To add to that, del Toro is at the height of his directing prowess, and Sally Hawkins is in the role of her career. Transcending its genre as a monster movie and a sci-fi flick, “The Shape of Water” speaks to the humanity within us all.

Of course, the movie boasts a number of stellar performances, but the standout is Sally Hawkins. While she plays a mute character, she is far from silent; with an ability to communicate volumes with just a look.

The score also stands out. Composer Alexandre Desplat creates beautiful melodies that melt scenes together, and create the coziest viewing experience for a story set in this era. For something that usually isn’t noticed, this soundtrack definitely stands out.

Among the many Oscars for which this film is favored to win, including best picture, is best director. “The Shape of Water” stands alongside “Pan’s Labyrinth” as del Toro’s best work. He creates incredible tension and a romantic chemistry that wouldn’t have been thought possible before seeing the movie. Among those nominated, del Toro deserves to win, and everyone deserves to see this film.