‘This Is Norman:’ documentary on daily life, travel of ‘extraordinary man’ 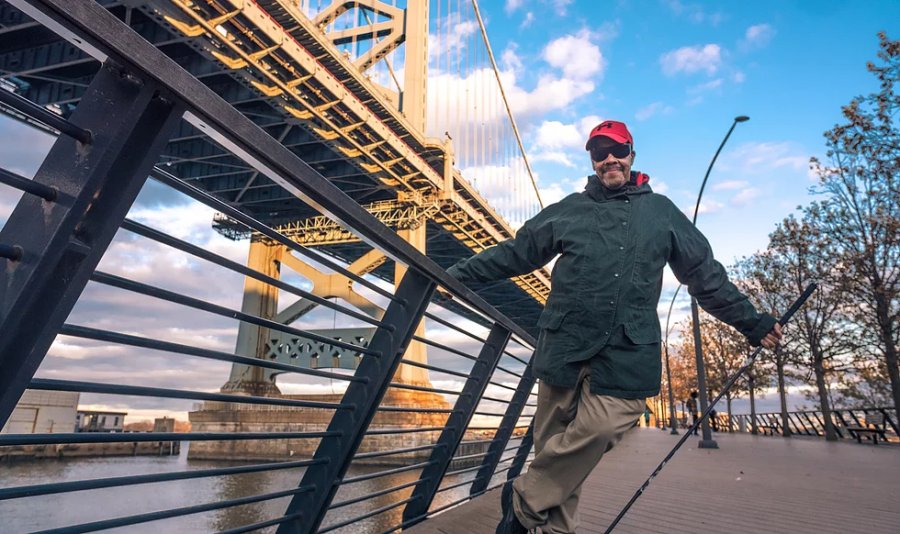 SUBMITTED Norman, 66, has struggled with blindness and retinal deterioration all his life, but despite difficulties remains a positive and caring person. He is native to Philadelphia and dreams of taking a trip to Rome. SDSU graduate student Kathleen Poliski co-directs and produces a documentary about his life.

“If you could go anywhere, where would you go?”

This is the question South Dakota State graduate student Kathleen Poliski asked her friend Norman.
Without hesitation, the 66-year-old Philadelphia native told her Rome, a place he’s wanted to go since he was 12 years old.

Norman was born blind in his right eye and over the course of his life, his vision deteriorated. Despite a lifetime of struggle he has remained “sweet, kind and caring.”

“As he continued to speak it broke my heart,” Poliski said. “Who would he go with? I was speechless because I knew the answer: no one.”

Poliski met Norman two years ago through a volunteer program called Communicare in Philadelphia. Little did she know, it was the start of an extraordinary friendship.

After a couple months, Poliski decided it was up to her to make his dream come true.

Along with her colleague Skyler Jenkins, Poliski is planning to surprise Norman on his 67th birthday with a trip to Rome. The two are also co-directing the documentary “This is Norman.”

The film will follow Norman throughout the course of his day, as well as fulfill Poliski’s requirement for her master’s degree in mass communications at SDSU.

“While getting Norman to Italy is extremely important, we are going to spend February and March really focused on the documentary as a whole,” Poliski said. “Which will highlight Norman’s day to day life and the difficulties that sometimes come along with being blind and living alone in the city.”

To fund the trip, they started an Indiegogo campaign called “Let’s get Norman to Italy,” meant to make Norman’s lifelong dream a reality.

“The project has had such an amazing response,” Poliski said. “We raised $4,000 in four days and we’ve been continually getting donations ever since launching on Jan. 10.”

“From the beginning I didn’t know what I was getting myself into, each visit snowballed. We had so many things in common,” Poliski said.

Despite the 40 year age gap, the two developed a fast friendship. Norman even refers to her as his “little sister.”

“We both love red wine and Italian food,” Poliski said. “He will check on me when I’m sick, even when my best friends are like ‘You’ll be okay,’ he’ll text me and say ‘Can I bring you some soup?’”

The Indiegogo campaign made $4,000 in four days, and Poliski is certain they will either hit their goal of $8,100 or at least come close. It’s a flexible goal, so even if they don’t hit their projected amount, they will still keep the donations.

Any donations over the $8,100 goal will be donated to Communicare.