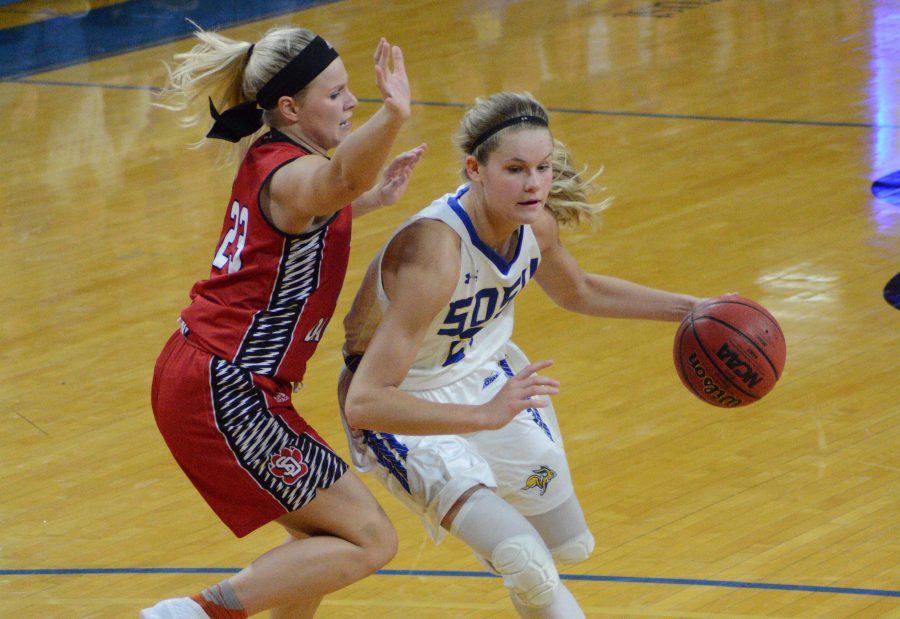 After defeating the North Dakota State Bison and Omaha Mavericks earlier season, the South Dakota State women’s basketball team will have a chance to get a season sweep of both teams.

The Jacks (17-5, 6-1) are in second place in the Summit League standings. They suffered their first home loss and first conference loss of the season against South Dakota Jan. 25. Redshirt junior guard Macy Miller led the Jacks with 18 points and junior guard Madison Guebert followed close behind with 17.

SDSU responded with a blowout win against Fort Wayne Jan. 27. Senior forward Ellie Thompson scored a season-high 23 points, while Miller added 22 points to their 105-49 win. The final score was the most points earned by the Jacks since 2008.

Tip-off will be at 7 p.m. at the Scheels Center in Fargo where the Bison have a 6-3 record on the season.

Next, the Jacks will go on the road to Omaha (9-10, 1-6), who, like North Dakota State, has lost four of its last five games. The Mavericks are 6-4 at home this season. South Dakota State began conference play by defeating the Mavericks 89-64 Jan. 3 at Frost Arena.

“We struggled with both teams at Frost,” head coach Aaron Johnston said about the first matchups against Omaha and NDSU. “The games finished with a high scoring margin, but the first half was tight in both games. I’m sure both teams can look at the first half of those games and pick out things they did well and build on them.”

Johnston said the Jacks, despite their offensive success, need to focus on the other side of the ball as well, especially if the team wants to have success this week.

“We can’t rely on out scoring teams on the road,” Johnston said. “Because of that, it will be important for us to defend well these next two games. We’re going to have to do a better job defensively of getting set in transition, guarding the ball and keep it away from the basket.”

After a four-game homestand, Johnston said the team will have a challenging road ahead.

“Five of our next seven games are on the road so the second half of our conference season will be challenging,” he said. “We’ll need our leaders to play well and to be good about moving us in a good direction going forward.”

Johnston said freshman forward Myah Selland will be out at least another week. She’s missed the previous four games with a foot injury.

“We assume that she’ll probably be out this weekend, but we’ll take a look at her next week,” he said.
“We certainly don’t think it will be a season-ending injury. She’s just not quite ready yet.”
Tipoff against Omaha will be at 1 p.m. at Baxter Arena.