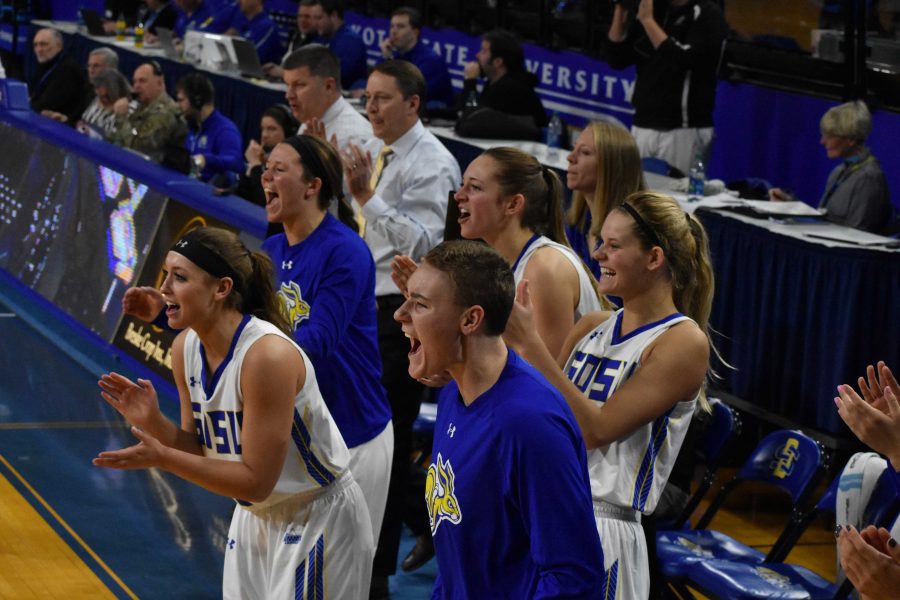 ABBY FULLENKAMP The Jacks celebrate a basket scored by Ellie Thompson (45) during the second half of the Jan. 6 game against NDSU in Frost Arena. The Jacks beat the Bison 83-63. The South Dakota State 2017-18 women’s basketball roster has players from North Dakota, Minnesota, Nebraska and South Dakota. Recruiting the best players from around the region has put The Jacks at the top the Summit League with a 15-4 record.

Looking at the 2017-18 South Dakota State wom en’s basketball roster, one common thing stands out amongst the 13 players: they were all recruited from within South Dakota or one of its bordering states.

Recruiting local talent is nothing new for the Jacks. Past rosters have been loaded with players mostly from South Dakota and Minnesota.

Aaron Johnston is in his 18th year as head coach of the Jacks and has led the team to a 430-146 record. The team has won seven Summit League tournaments, including a dominant stretch from 2008 to 2012, when it won five consecutive times. So, it’s easy to see why SDSU is a top school in the Midwest for high-level recruits.

The combination of former high school players of the year in South Dakota and its bordering states has paid off so far in 2017-18. The team is on top of the Summit League with a 15-4 overall record and a 4-0 record in the Summit League.