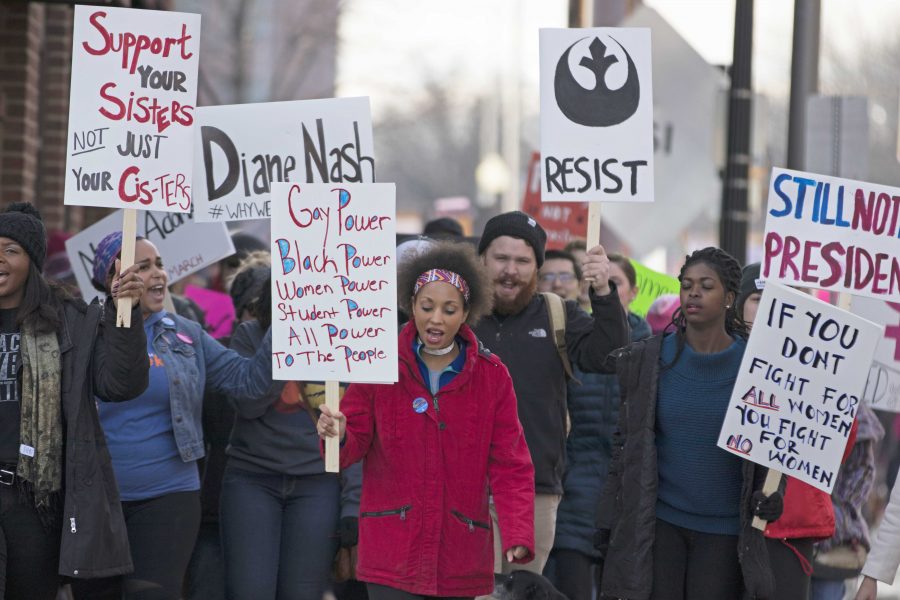 GARRETT AMMESMAKI Arlinda Peacock walks in the middle of the Women’s March Jan. 20 as the procession makes its way down Dakota Avenue. The march started at Carnegie Townhall and finished at the Minnehaha Courthouse.

Cries of “the people united will never be divided” and “black lives matter” rang out across Dakota Avenue as the procession made its way from Carnegie Town Hall to Minnehaha Courthouse.

Among the crowd of 2,500 citizens of South Dakota and surrounding states, were students from South Dakota State. They marched under different banners, but the message was resoundingly the same.

“We’re here to march for women’s equality and equality for all,” said Claire Garduno, sophomore entrepreneurial studies major and secretary of the SDSU Feminist Equality Movement.

Garduno is one of the 14 members of FEM who carpooled from campus.

“I think it’s good to get out and see how much this community can really come together and show the pride we have for the equality we want,” she said. “It’s a really great movement that’s going on nationwide.”

Sioux Falls Mayor Mike Huether was one of multiple speakers ranging from local politicians to a single mother who emigrated to the United States from Africa. They all expressed the need to vote, and their pride for being amongst people marching under a banner of equality.

“When you vote, you have to vote based on what is right for you and the causes you care about, versus the party you are associated with,” Huether said. “This has been a challenge for our great state of South Dakota … but we can change that, and you’re making that happen here today.”

According to South Dakota Dashboard, in 2016 just 31 percent of South Dakotans ages 18 to 24 voted. It was the lowest participation rate by age in the state.

“I don’t think college-aged people realize how much (voting) will affect them,” Garduno said.

Garduno said it is “shocking” how many college students she meets who aren’t educated or involved in politics and don’t care to get involved.

“The sad part is people should care — regardless of your position. It is really important because we are the future,” she said. “We are the people, we’re supposed to have a say in what happens with our country. When people don’t care about it and don’t want to educate themselves, it creates a lot of imbalance.”

President of FEM and sophomore political science major Alexis Dooley agreed, comparing campus culture to a “bubble,” where students are relatively unaffected by laws that are passed.

The two are optimistic, though, and believe this year’s march in Sioux Falls showed a “fire building in activism.”

“We’re the generation that’s going to make a change,” Dooley said. “(The march) is representing the future and what we want the future to look like.”