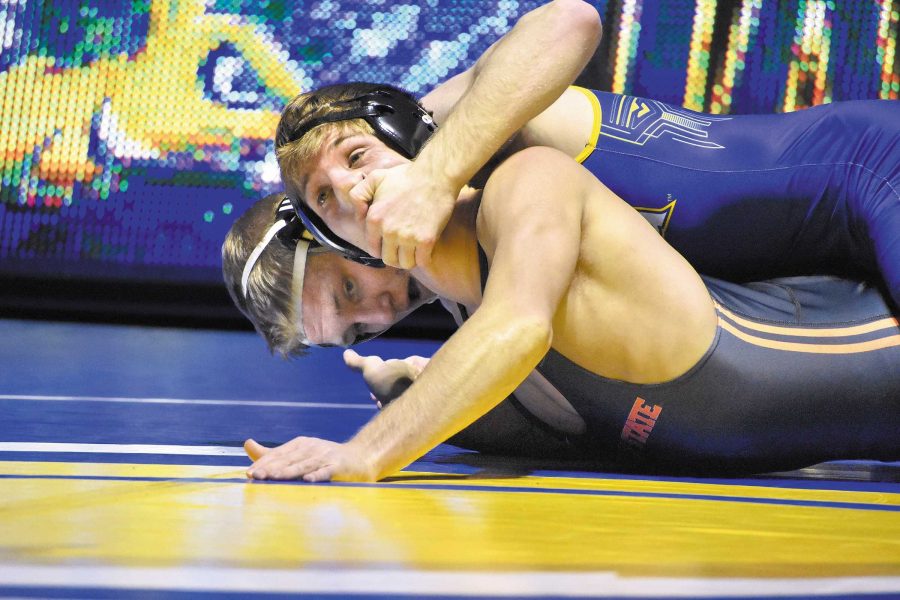 Seven straight wins for the South Dakota State wrestling team has head coach Chris Bono and the Jacks heading into the heart of their Big 12 schedule with a full head of steam.

It was another successful week for the Jacks. They had two duals and outscored their opponents by a 63-16 margin.

“Going on the road is not easy,” Bono said. “They wrestled well and we came home injury free.”

The latest win for SDSU (7-2, 2-0) came against the Air Force Falcons, in which their lower weights got them rolling with two early pins on their way to a 32-6 blowout in Colorado Springs, Colorado.

At the 125-pound weight class, freshman Connor Brown got the Jacks going with a 13-9 decision over Anthony DeCesare. Junior Seth Gross, who is ranked No. 1 in the 133-pound weight class, kept his undefeated season intact as he came up with a pin in 1:06 over Isaac Jimenez. Sophomore Henry Pohlmeyer got bonus points for the Jacks with a pin over Garrett O’Shea in 6:14.

Senior Luke Zilverberg, who is ranked No. 12 in the 157-pound weight class, had a decisive 10-1 major decision over another ranked opponent in No. 20 Alex Mossing.

At the heavier weights, the Jacks swept the final four matches against the Falcons, including senior David Kocer, who had bonus points over Michael Billingsley with a 12-0 major.

The last three matches for the Jackrabbits were all close victories. In the 184-pound match, sophomore Martin Mueller edged Zen Ikehara 3-2. Senior Nate Rotert, who is ranked No. 9 in the 197-pound weight class, kept his impressive season rolling with a close 2-1 victory over Anthony McLaughlin. Senior Alex Macki had a three-point decision over Matt Wagner, as the heavyweight was able to sneak by with an 8-5 victory.

Up next, the Jacks will stay in Brookings for two home duals as the No. 20 Wyoming Cowboys (7-2, 1-1) will come to Frost Arena to duel the Jacks.

Both squads will be putting their winning streaks on the line, Wyoming has now won six straight matches.

Wyoming will pose a threat because, like the Jacks, the Cowboys have strength at their middleweights.

“Our strengths are the same.” Bono said of the Cowboys. “We are a little stronger up top, we’ve just got to prove it.”

Wyoming boasts four wrestlers who are ranked in the Intermat rankings. The top wrestler for Wyoming is their 141-pounder, Bryce Meredith, who is ranked No. 1.

Meredith has had an impressive season up to this point, going 19-1. His only defeat this year came at the Cliff Keen Invitational in December against Yianni Diakomihalis of Cornell.

Seth Gross hasn’t faced a top-20 wrestler yet this season, but has proven to be able to handle the top competition throughout his career.

Bono said that he wants to give the fans a matchup of two top-ranked wrestlers in the country, so he is moving Gross up to the 141-pound weight class so he can face Meredith. Gross and Meredith have faced twice before and split them.

“We owe it to our fans that support us to see the best possible match,” Bono said.
Bono added that his first emphasis will be to win the dual, however, he wants to be able to do both.

There will be another ranked matchup at the 157-weight class match. No. 10 Archie Colgan will face No. 12 Luke Zilverberg. Colgan has had an impressive season and is 23-6 on the year.

The other ranked wrestler for the Cowboys, is their 165-pound wrestler. No. 14 Brandon Ashworth rounds out the ranked Wyoming wrestlers. Ashworth is 24-3 on the year.

The dual will begin at 7 p.m. on Thursday in Frost Arena.

Over the off-season, the Northern Iowa Panthers were added to the Big 12 Wrestling Conference. They will travel to Frost Arena Sunday to take on the Jacks in the first Big 12 meeting between the two schools.

The Panthers (5-2, 2-0) will be coming off of an impressive tournament performance at the Virginia Duals, in which they defeated Kent State, Chattanooga and Oklahoma, but dropped a dual to the Arizona State Sun Devils.

Six of the 10 starting wrestlers for the Panthers are ranked by Intermat. The Panthers and the Jacks will matchup in different ways, as the strength of UNI’s lower-weight classes is at 125, 141 and 149, while the Jacks have power at the 133 and the 157 weight classes.

The 174-weight class and 197-weight class will be the only matches between the two teams that will feature ranked opponents. No. 7 Taylor Lujan will face off against No. 9 David Kocer at the 174-weight class. Lujan has had a successful campaign thus far, as he is 22-4.

The other ranked match will be No. 9 Nate Rotert and No. 19 Jacob Holschlag. The two met previously, last year when Rotert took a 4-1 decision over the then-unranked Holschlag.

The match will start at 2 p.m. on Sunday.