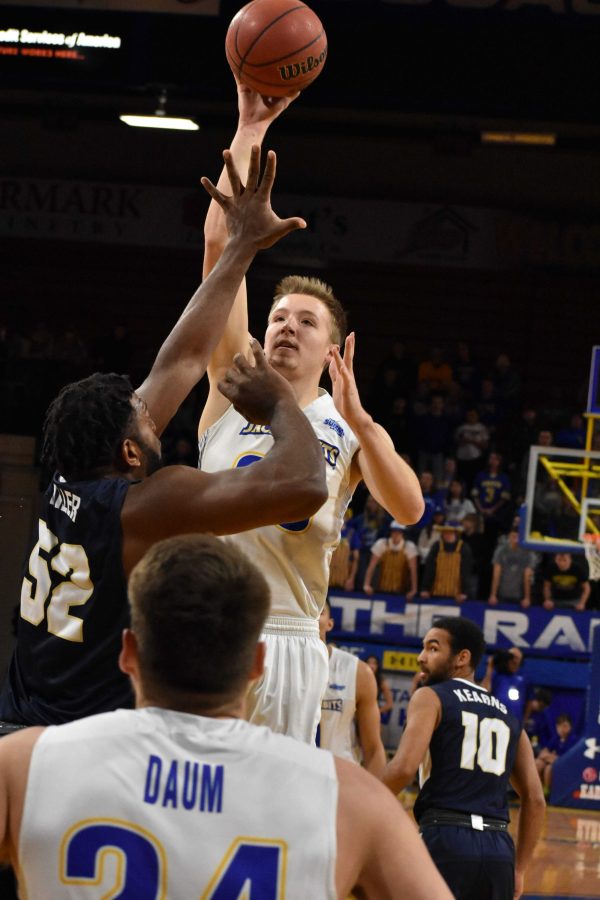 Senior forward guard Reed Tellinghuisen (23) takes a jump shot over Oral Roberts forward Chris Miller (52) during the first half of the game Thursday, Jan. 11. The Jacks beat the Golden Eagles 78-73.

The South Dakota State men’s basketball team now sits alone atop the Summit League, and the only team unbeaten in conference play with a 78-75 win over Oral Roberts.

The Jacks (14-5, 3-0) were led by junior forward Mike Daum who had a double-double with 27 points and 12 rebounds. Daum played a key factor in the win on both the offensive and defensive side of the ball.

Earlier today, Daum was named to the Lou Henson Award watch list, which is awarded to the nation’s top Division I mid-major player.

The X-factor for the South Dakota State offense was Brandon Key, who didn’t score a point in his 19 minutes on the floor, but got things done in different ways than scoring. He had seven assists and a rebound and didn’t enter the game until the Jacks found themselves in a nine-point hole.

“Brandon Key came in and gave us a huge spark,” said head coach T.J. Otzelberger in a postgame interview.

The biggest play for the Jacks came with 20 seconds left in the game when junior guard Tevin King was able to come up with an offensive rebound that helped the Jacks run vital seconds off of the clock to seven seconds.

South Dakota State had 11 offensive rebounds, which is up from their average of just nine. A reason that the Jacks don’t have great offensive rebounding numbers is due to the fact that they shoot so well.

Oral Roberts (7-12, 3-1) came into the game averaging 38 rebounds per game, but the Jacks were able to out-rebound the lengthy Golden Eagles 37-34.

“It’s been awhile since we have been outrebounded,” Oral Roberts head coach Paul Mills said.

Coming into the game, the Golden Eagles had five guys scoring in double digits, but the Jacks limited just three players to double digits. Oral Roberts was led by freshman forward, Chris Miller, who had 14 points and two rebounds.

Up next, the Jacks will continue Summit League play on Saturday against the Denver Pioneers at 2 p.m. in Frost Arena.