Blue and yellow a staple of Title Tuesday 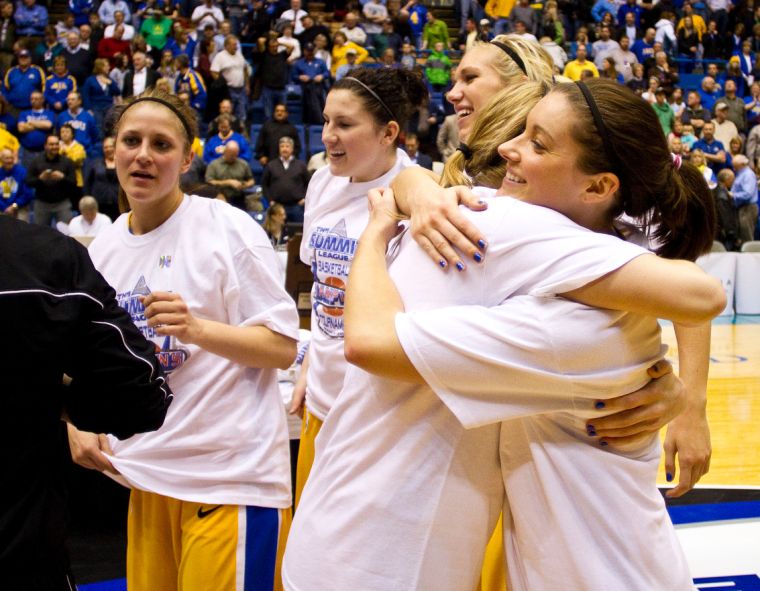 Elements of SDSU’s season as a whole manifested throughout Title Tuesday at Sioux Falls Arena.

But the Jacks did not incite key characteristics from their season in earning championship t-shirts and a slot on the bracket for the third straight year, in three years of eligibility.

If SDSU played like they did in December, they’d have checked out of their hotel rooms Saturday night. But they turned a corner, with a lofty 11-1 record since the end of January to show for it.

“The second half of the Summit League was the turning point,” Macie Michelson said. “We started playing consistently as a team.”

The joke of consistently-inconsistent persisted, and it seemed fitting. At 13-13 heading into their second regular season matchup with Oakland, they were the true definition of it.

Not in Frost Arena south, where they remain undefeated at 9-0.

The Jackrabbits, through all their typical high-action style of play, committed a season-low 10 turnovers in the championship tilt. At the climax of SDSU’s woes, they committed 38 in a single game.

They dished out 20 assists on 24 made field goals. Post player Jennie Sunnarborg had nine assists herself. Jill Young scored only one point but had nine rebounds. Michelson limped off the floor as she’s done many times this year but came back in. Jennifer Schuttloffel hit a rare three that pushed the lead to 10, the first time the lead reached double-digits and was maybe the first sign that the 4,071 fans could smell a win.

And the player everyone thought would be “the” go-to player this season, who looked uncomfortable two months ago, took tournament MVP and will play in her fourth NCAA tournament game days from now.

Did any of that look likely one month ago?

They looked deliberate in their pace, coursing through set plays and showing emotion when emotion could afford to be shown. They played a team indisputably at their best, prompting head coach Beckie Francis to proclaim her team played a “perfect game” the previous day against Oral Roberts. A four seed trumpeting their belief they belonged. They believed they could win, but were magnanimous in defeat.

“Give SDSU credit,” Bethany Watterworth and Sharise Calhoun would say afterward to reporters, then speaking on how great a team the Jacks were in the rematch from 2009’s championship.

By all accounts, both teams played well: A tight rebounding margin, similar shooting effectiveness from the floor, enough gusto and power to win. Neither team pulled away. An 8-0 Jacks run eight minutes into the second half was the only SDSU spurt, but Oakland didn’t fade. After falling down 10, they drudged back with two threes in what seemed like seconds.

In crucial moments, SDSU looked like the antithesis of their old selves, poised under duress, and more than ever, mature. As much as Oakland’s school band repeatedly attempted to break that poise with vulgar bathroom-related chants, they weren’t enough.

SDSU would hold, as they’ve done the past three years in what is becoming an accomplishment as routine as Michelson fist pumps.

They will not enter the field as daunting as 2009, with a 31-2 mark in their first year of eligibility. That team clinched so early that those unfamiliar mistook the Jacks for San Diego State despite residing in top 25 polls for most of the year. But that ’09 squad won as many games in the Summit League tournament as this year’s team that lost eight of nine at one point and four in a row at home.

“This goal was about three games in March,” said head coach Aaron Johnston. “It didn’t have anything to do with those games. A lot of people were saying we weren’t playing well and we didn’t, I think I led the bandwagon on that.”

“We came together. We started competing. It was a slow process but we turned it around.”

And again, the crowd showed up.