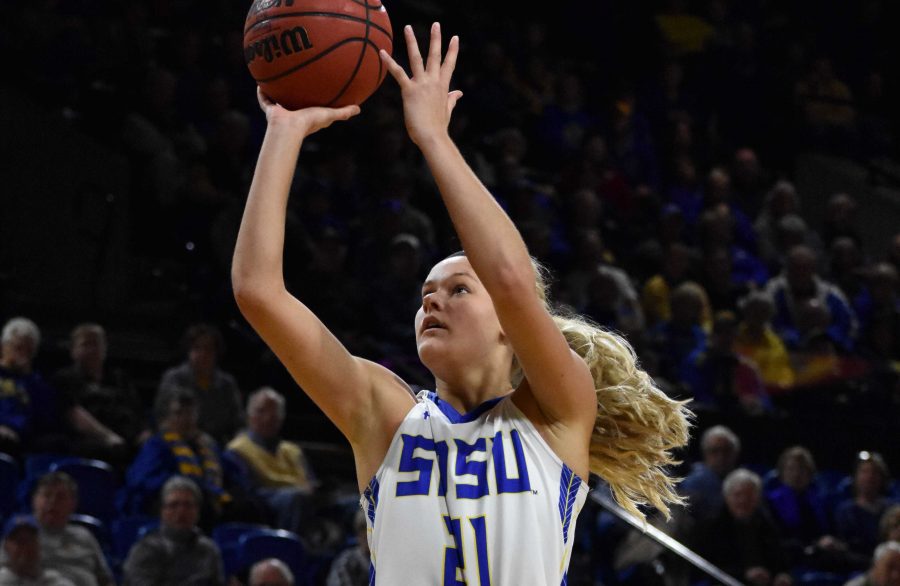 The South Dakota State women’s basketball team came back from Fort Lauderdale with a pair of victories and hopes to keep the momentum going when they host the Northern Iowa Panthers Nov. 30. However, the Jacks will face their toughest challenge of the season when the No. 4 ranked Louisville Cardinals come to town Dec. 3.

The Jacks defeated No. 23 North Carolina State 75-67 Nov. 24 and Charlotte 71-70 Nov. 25 in the Puerto Rico Clasico. Madi Guebert was the hero for the Jacks as she hit a three-pointer with no time left to lift SDSU over Charlotte.

The Panthers (2-3) are coming off of a 53-43 loss against Central Florida. SDSU leads the all-time series against UNI 8-3 and has won the last three meetings.

“They do a great job running sets to find match-ups that they like,” Johnston said. “We’ve played them many times over the years and I’d say we have similar traits.”

Freshman forward Myah Selland had a great weekend in Fort Lauderdale. She made four three-pointers and scored a career-high 20 points against NC State.

“She’s a very versatile player and makes everyone around her better. Her versatility fits so well with what we do and she’s always looking to make an extra pass and find her teammates,” Johnston said.

Redshirt junior guard Macy Miller is leading the Jacks on offense, averaging 17.4 points per game, while Guebert is close behind, averaging 15.4 points.

The Cardinals are undefeated on the season and have beat three ranked teams. They defeated the Jacks 83-30 in Louisville last season, but SDSU was without Miller in that game. This will be the second time a top-five opponent will come to Frost Arena. The Jacks fell to No. 3 Notre Dame 75-64 in 2015.

“We’re excited to have teams like that continue to come to Frost Arena because it does wonders to our atmosphere and fan base, but it also forces us to become a better team,” Johnston said.

“Louisville will be as good of a team as we’ll face,” Johnston said. “They have the potential to go to the final four and will compete with some of the best teams in the country. They have a whole different level of players.”

This will be the second ranked team SDSU has faced this season. Last season, the Jacks went 0-2 against ranked opponents.

Tip-off against UNI is scheduled for 7 p.m. Nov. 30 and tip-off against Louisville will be at 2 p.m. Dec. 3. Both games are at Frost Arena in Brookings.