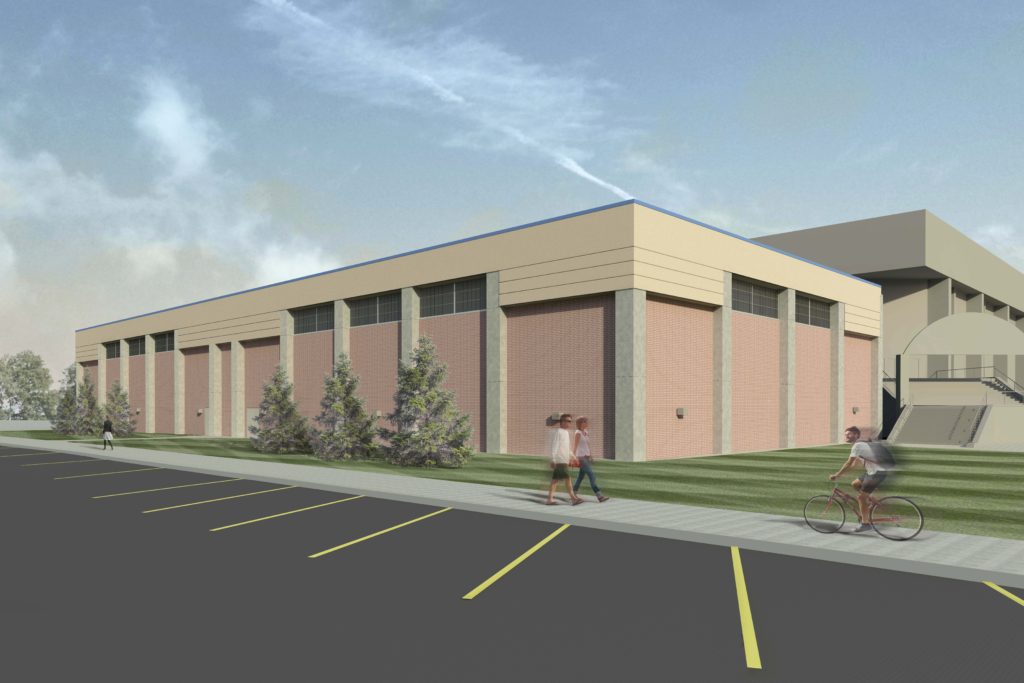 SUBMITTED An artist’s rendering shows the plans for the new practice facility that will be located south of Frost Arena. It will cover most of an existing commuter parking lot. The facility will include two gyms that will be used by the men’s and women’s basketball teams and the volleyball team.

A construction crew put up fences around the parking lot south of Frost Arena Nov. 13. It’s the first step in the construction of a $12.8 million project to build two practice gyms for the South Dakota State basketball and volleyball teams.

The final plans were approved by the South Dakota Board of Regents (SDBOR) in December 2016 and signed by Gov. Dennis Daugaard in March 2017. All the money funding project was donated.

The teams have been practicing in Frost Arena since it was built in 1973. They sometimes use The Barn on campus, but Jeff Holm, senior associate athletic director of facilities and operations, said they don’t like to do that.

“Right now, our basketball teams and volleyball team do not use The Barn very often at all for practice,” Holm said. “It’s difficult to take all your equipment and supplies over there and then get set and have no showers.”

Holm said the reason they are building the practice gyms is because the three teams, especially in the fall, have found it hard to find times to practice that fit everyone’s schedule.

“If we have an event in Frost Arena, that shuts things down. So the practice schedules are goofy, and it affects our student athletes academically because some classes are only offered at certain times, so it’s hard for them to make it to practice,” he said.

Holm added when an opposing team comes to play the Jacks, they have to use Frost Arena for practice, cutting down on practice time as well. With the new gyms, the teams will be able to practice at any time.

Men’s basketball head coach T.J. Otzelberger said he thinks the new facility will be beneficial for recruiting and helping the team improve.

“We feel that our program, even though we have this small town feel, that we’re still a big-time program,” he said. “Having a facility like that will help back that up even more.”

The next project for the athletic department will be renovating Frost Arena. The renovations will include upgrading all of the seats to have backs on them, upgrading concessions, restrooms, suites, loge level and a new wrestling room.

Women’s basketball head coach Aaron Johnston said the atmosphere in Frost Arena is as good as any in the country, but it’s time for renovations.

“As far as sight lines, access to concessions and restrooms and all the amenities that you need to have a good fan experience, we need an overhaul,” Johnston said.

The location of the facility has received backlash from some students because it is going where a commuter parking lot was. Senior hospitality management major Preston Premus said he used to park in the commuter lot every day.

“It sucks when I’m running late for class now because I have to park all the way on the other side of campus,” Premus said.

Holm said there will be some spaces remaining in the lot and there will be a new parking lot installed to the east of Frost Arena to service the Performing Arts Center and Frost this upcoming summer.

“When we do projects and we take away parking, a responsibility of the new project is to add at least the same amount of parking,” Holm said.

The department decided to build the practice facility first so when they renovate Frost Arena their athletes have a place to practice. None of the plans for the renovations have been sent to the SDBOR.

The plan for Frost Arena has been approved by the university and now all they have to do is raise the money to present it to the SDBOR. The completion date for the practice facility is scheduled for Nov. 2018.